The Climategate story is like a snowball rolling down a hill, getting bigger every hour and along the way the snowball keeps picking up more and more casualties; the latest being Michael Mann purveyor of the now discredited “hockey stick” graph on global warming.

A prime piece of evidence linking human activity to climate change turns out to be an artifact of poor mathematics.
According to Masachusettes Institute of Technology

The video clip while pretty funny does largely describe the machinations of Mann and his “adjustment” of the data to suit his own point of view. The problem for Mann is that more and more of his data and methods are being questioned, not only by hugely respected university’s like MIT, but also other scientists. On more than one occasion Mann has got his data inverted and has now rediscovered  the Medieval Warming Period.

Meanwhile back at the IPCC one of Mann’s fellow climatologists Eduardo Zonita has demanded that Mann should not contribute to future reports as Mann is “not credible any more.” Zonita also wants UEA CRU’s director Phil Jones and another IPCC lead author, Stefan Rahmstorf also banned from further contributions.

“These words do not mean that I think anthropogenic climate change is a hoax. On the contrary, it is a question which we have to be very well aware of. But I am also aware that in this thick atmosphere -and I am not speaking of greenhouse gases now- editors, reviewers and authors of alternative studies, analysis, interpretations,even based on the same data we have at our disposal, have been bullied and subtly blackmailed. In this atmosphere, Ph D students are often tempted to tweak their data so as to fit the ‘politically correct picture’. Some, or many issues, about climate change are still not well known. Policy makers should be aware of the attempts to hide these uncertainties under a unified picture. I had the ‘pleasure’ to experience all this in my area of research.”

Zonita realises the consequences of the words with a further statement:

By writing these lines I will just probably achieve that a few of my future studies will, again, not see the light of publication.

Wont be long before the Climate Inquisition takes Zonita away in the dead of night so he can be tortured and confess his heresy.

As their argument melts away we can expect more attempts at suppression of free speech on the AGW lie, some like this little gem posted in response to David Cameron’s statement on Climate Change from a Ross J Warren:

Anyone found guilty will be burned at the stake, the ducking stool will make a return and the heads of the traitors will be stuck on poles outside the University of East Anglia

As the almost total news blackout on the content of the leaked documents from the University of East Anglia continues, the Gruaniad’s George Monbiot continues the crusade for the AGW lie.

With all the zeal of a missionary bringing Christianity to the unenlightened masses, Monbiot’s tone is both that of the self-appointed expert, and that of the Catholic Church preaching against the heretic Martin Luther.

Climate sceptics have lied, obscured and cheated for years. That’s why we climate rationalists must uphold the highest standards of science

This how the article starts, note how in the first two sentences Monbiot seeks to establish the premise that anyone who does not believe in AGW is “irrational”

Pretending the climate email leak isn’t a crisis won’t make it go away. I have seldom felt so alone. Confronted with crisis, most of the environmentalists I know have gone into denial. The emails hacked from the Climatic Research Unit (CRU) at the University of East Anglia, they say, are a storm in a tea cup, no big deal, exaggerated out of all recognition

Monbiot feels so alone, because only he and a select few with his point view understand the problem, while the “irrational” masses remain unconvinced. Aardvark images that members of the Flat Earth Society also feel fairly isolated.

The response of the greens and most of the scientists I know is profoundly ironic, as we spend so much of our time confronting other people’s denial.

The greatest tragedy here is that despite many years of outright fabrication, fraud and deceit on the part of the climate change denial industry, documented in James Hoggan and Richard Littlemore’s brilliant new book Climate Cover-up, it is now the climate scientists who look bad.

The rest of the article can be found here.

Climategate is going to run and run and as the farce in Copenhagen approaches so more information on Climategate will be forthcoming.

Climategate – Whitewash In The UK, Rebellion In Australia

The hacker who got into the University of East Anglia’s Climate Research Unit and released 61 Megabytes of confidential Climate Change lies to the world, should be thanked and rewarded for exposing this great scam. There are 1079 emails and 72 documents many of them very embarrassing to the Anthropogenic Global Warming (AGW) camp. Some are very strange like one Climate Change evangelist crowing over the death of a fellow scientist who was a non believer in the AGW lie.

But perhaps the most damaging revelations – the scientific equivalent of the Telegraph’s MPs’ expenses scandal – are those concerning the way Warmist scientists may variously have manipulated or suppressed evidence in order to support their cause.

The repercussions of Climategate are growing, in the USA Republican Senator James M Inhofe is calling for an investigation into Climategate. `Letters have been sent to several scientists warning them to “Retain Documents”.

In this country apart from the Daily Mail and James Delingpole, Climategate has been subject to an almost total news blackout. The BBC evangelising the AGW lie to the max reported the hacking of the Climate Change Lie as hacking crime, while conveniently ignoring the content and implications of the information obtained. This is the same BBC that is sending a staff of 35 to cover the Copenhagen farce next month.

To be a AGW non believer in the 21st Century is almost like being a heretic 500 years ago, END_OF_DOCUMENT_TOKEN_TO_BE_REPLACED

Vikings colonised Greenland as the Arctic was warmer 1000 years ago

In January 2006 a major scientific report was published by the Government, amid the numerous warnings about greenhouse gases, impending doom and disaster is a mention of the Greenland ice sheet melting and sea levels rising 25 feet over a 1000 years.

In the report’s forward, then Prime Minister Tony Blair writes that “it is now plain that the emission of greenhouse gases… is causing global warming at a rate that is unsustainable.”

Has Greenland always had an ice sheet the size it is today? No. END_OF_DOCUMENT_TOKEN_TO_BE_REPLACED

The Iraq Inquiry – It Is Going To Be A Whitewash 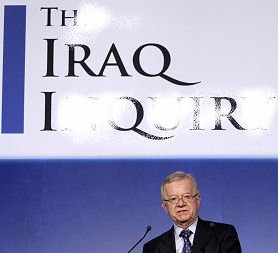 Iraq Inquiry it's going to be a whitewash

Many military strategists will tell you to the best place to hide something is in plain sight, this stratagem also applies to politics.

It has long been the British way to use the Public Inquiry to achieve this end.

Gordon Brown originally wanted the Iraq Inquiry to be held in secret but bowed to pressure and famously U turned, or did he? One thing you can say with certainty about the Prime Mentalist is that what he offers with one hand he takes away with the other.

Brown has a lot to lose not only politically, but also personally. It is bad enough for Labour that Tony Blair has repetitively lied to Parliament and the country so he could start his illegal war and get his place in history. The problem for Labour and Brown is that as Chancellor of the Exchequer and Tony Blair’s right hand man, Brown would have been fully briefed to the same extent as Blair on the non-existent WMD’s; Brown would also have had to provide the finance for the war.

Gordon Brown is as deeply involved in this as Tony Blair, END_OF_DOCUMENT_TOKEN_TO_BE_REPLACED

“Among the many great amusements of the Climategate scandal are the myriad imaginative excuses being offered by the implicated scientists and their friends in the MSM as to why this isn’t a significant story. Here are some of the best”

Climategate: the final nail in the coffin of ‘Anthropogenic Global Warming’? – James Delingpole

The Chairman of the Iraq Inquiry is Sir John Chilcot is a retired career civil servant who was permanent under-secretary of state at the Northern Ireland Office until 1997. Prior to his work at the Northern Ireland Office Sir John served in a variety of posts in the Home Office, the Civil Service Department and the Cabinet Office, including private secretary appointments to both Labour and Conservative Home Secretaries, and to the head of the civil service.

Chilcot was a member of the Butler Review which many people feel was too lenient towards Blair and the Labour government. There are some doubts about Chilcot’s bottle when it comes to questioning former Labour cabinet ministers. Gordon Brown wanted the Iraq inquiry to be held in secret behind closed doors, Chilcot to his credit said it must be held in public so Brown U turned once again and the inquiry will be mostly held in public; one is left wondering how many times the “National Security” and “Official Secrets Act” cards will be played.

Brown shied away from making people give evidence under oath which will prevent any subsequent charges for perjury; Chilcot is thinking about making witnesses give a “formal undertaking” whatever that is. The Inquiry is not due to publish it’s findings until the end of 2010, though Chilcot has said there is the possibility of an interim report which is likely to very damaging to Gordon Brown if END_OF_DOCUMENT_TOKEN_TO_BE_REPLACED

Climategate: how the MSM reported the greatest scandal in modern science – James Delingpole

So What Does Labour’s Private Polling Really Say? – Iain Dale 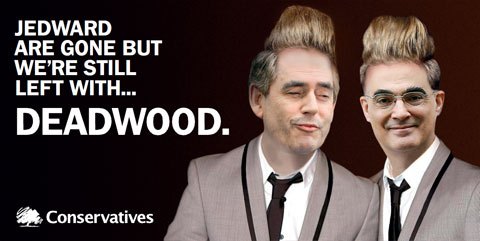 Harriet Harman Born To Be Wild