The last war that was fought by Britain that had full public support was the Second World War, where we fought a recognised and deadly regime that really would have plunged the world into a new Dark Age. There was both the military and political will to beat Hitler, the bombing of British cities was a real tangible threat the public believed because they were the targets, their houses destroyed, relatives killed or wounded. Because the threat of death from the air was tangible the public knew they had no option, the indiscriminate use of Hitler’s V weapons later in the war kept the people in the firing almost to the end of the war in Europe. The Second World War was fought with the 3 things needed: The Military Means, the Political will and Public support, in short the objectives of the war were clear.

Move forwards in time 5 years, the date June 25th 1950, North Korea invades South Korea and Britain once again finds herself at war this time in a UN police action.The Korean war dragged on for 3 years, millions of Koreans died and many many UN soldiers died; the US lost more men killed in 3 years in Korea than it did in the whole Vietnam War. Britain suffered heavy losses as well, the stand of the Gloucester’s at the Imjin River was an action fought in the highest traditions of our armed forces. It must be remembered that we still had Conscription or National Service and in 1950 you got your call up papers on your 18th birthday. So unlike today’s forces which are 100% volunteers National Service men were forced to go and fight not only in Korea but also the Malayan Communist Emergency.
Korea was a little understood war and not particularly popular, when the war ended in a draw a communal sigh of relief went up. Korea started with the Military means, the Political will and Public Support, as the war dragged on the Political Will began to waver along with Public support. 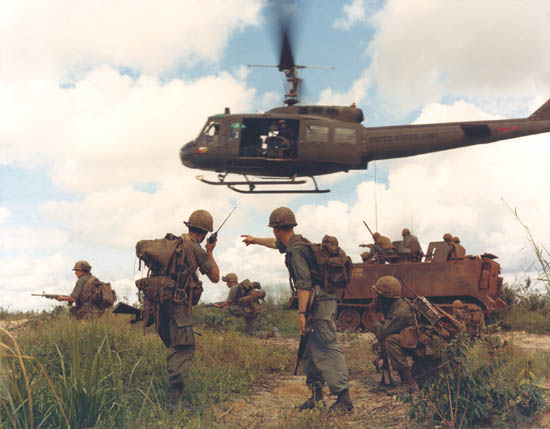 Vietnam has become the fear factor that is always raised when any UN or NATO action is mooted ; Vietnam demonstrated that you needed the military means, the political will and the public support to win.

Vietnam and the Invasion of Iraq by Bush/Blair both have something in common, they were both started by very big lies. US President Lyndon B Johnson faked an attack by North Vietnamese patrol boats on a US Navy destroyer and Blair lied about weapons of mass destruction in Iraq.

In the beginning the US public supported the Vietnam war, in the same way that the public here supported Iraq and Afghanistan.

Britain has the unique distinction of being the only country that has beaten an internal insurgency – Malaya, we beat the Communist bandits not only because we were militarily superior but we also won the hearts and minds of the Malay people.

This was a lesson not lost on the North Vietnamese. Ho Chi Minh and his generals realised early on they could never beat the US strategically, and in every major battle the US beat the North Vietnamese Army hands down.
So the North Vietnamese embarked upon a hearts and minds campaign, to convince the American public that the war was unwinnable and that their men were dying for nothing. The turning point came in 1968 with Tet Offensive. Tet was the biggest military disaster for the North Vietnamese, their casualties were horrendous, the Viet Cong were almost wiped out but due to a couple of significant successes like the occupation of the US Embassy in Saigon they scored a tremendous propaganda victory. Legendary reporter Walter Cronkite went on TV that evening and said the war was unwinnable.

US public support evaporated for the Vietnam war and by 1973 the last American soldiers were gone, over 58,000 died in Vietnam.

America had the military means to win, the political will drained away with each year of the war and the loss of public support ended the war.

The Falklands war had majority of public support but not to the full extent that WW2 had, but the cause was just and it was a short sharp war that ended with a pre-stated goal, to take the Falkland Islands back.

The first Gulf War had a defined objective, kick Saddam out of Kuwait; the Invasion of Iraq: find the weapons of mass destruction and topple Saddam. When no WMD’s were found support for the war began to wane.

In Afghanistan the objectives are muddled, like in South Vietnam the regimes supported by our governments aren’t the sort of people you would really want to govern in this country and as the war drags on it touches more and more lives, and the public will inevitably begin to question the loss of life to our service people.

The difference in cultures in Afghanistan/Vietnam to the West regarding the value of human life gives them a strategic advantage, the Vietnamese like the Chinese in Korea used human wave tactics where the casualties did not matter. No Western country post WW1 would tolerate that loss of life. The Taliban have stated they will take as many martyrs as they need to win.

The latest opinion polls show public support ebbing away for the war, but unlike in the US the British public have not turned on our military in the same way that the US public did on their returning soldiers.

To win in Afghanistan we needed the military means, which it is doubtful our forces were ever given, the political will to win, again, under Brown doubtful and the support of the public for the war which was there at the outset.

The country has no confidence in Gordon Brown as a leader or his Government, thus it follows that there is no confidence in his prosecution of the war and the reason the public support for the war has all but gone is the thought are our people are dying for nothing. We support our armed forces but not the war which is something of a paradox.

If we are to stay in Afghanistan then we need a Government that has empathy with the Armed Forces, there must be clearly stated objectives, the Military must be given the equipment to do the job and the political will to win must be there. As a Nation will need to believe again that our brave service men and women are dying for something worth their sacrifice.

If this is not done then we will leave tails between our legs on the last Chinook out of Kandahar and there will be one terrible and haunting question left, what did all those brave people die for?

I wrote this post for Armistice Day and to contribute to the debate about Afghanistan; new posts always attract a lot of hits and over a period of 4 – 5 days they gradually decline and drop off the radar. This post has been different between 150 – 200 people read it everyday.

This was also published in the Blog Paper where it was the subject of a certain amount of discussion.

The sentence the Vietnamese like the Chinese in Korea used human wave tactics where the casualties did not matter. was the subject of the comments, where it was described as outrageous to say this.

My father served during the Korean war and saw action for three years, for many years he said nothing about it and then one day he suddenly started talking the war and human wave attacks.

Two friends of mine served in Vietnam in A teams and experienced the same human wave tactics, that my father saw in Korea. The Taliban have said they will take as many martyrs as are needed to drive NATO out of Afghanistan, which brought back what my father and friends said.

The sheer will of a nation to take casualties on the same level we suffered during WW1 is difficult for the west to understand in the 21st Century, it is however part of the Taliban’s strategy.