← The Iraq Inquiry – It Is Going To Be A Whitewash
Climategate – Whitewash In The UK, Rebellion In Australia → 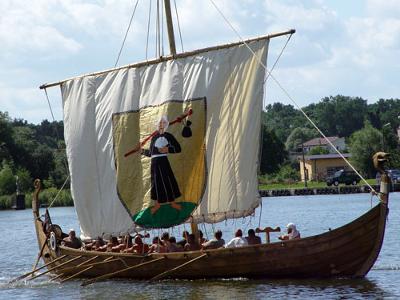 Vikings colonised Greenland as the Arctic was warmer 1000 years ago

In January 2006 a major scientific report was published by the Government, amid the numerous warnings about greenhouse gases, impending doom and disaster is a mention of the Greenland ice sheet melting and sea levels rising 25 feet over a 1000 years.

In the report’s forward, then Prime Minister Tony Blair writes that “it is now plain that the emission of greenhouse gases… is causing global warming at a rate that is unsustainable.”

Has Greenland always had an ice sheet the size it is today? No.

In 1991 two Caribou hunters in Greenland stumbled on a Viking farm that had been buried in the permafrost for 500 years.

These are some extracts from The Viking farm under the sand in Greenland by Terese Brasen:

“GUS is beautifully preserved because, once it was buried, it was frozen,” explained University of Alberta anthropologist Dr. Charles Schweger. “Things that are perishable and normally disappear are found at GUS.”

“The Norse arrived in Greenland 1,000 years ago and became very well established,” said Schweger, describing the Viking farms and settlements that crowded the southeast and southwest coasts of Greenland for almost 400 years.

Schweger recalls vividly the day the team uncovered GUS. Smells frozen in permafrost for 500 years exploded into the air. “It stunk to high heavens,” said Schweger. “There was no question about this being a farm.”

“The Greenland settlements were the most distant of all European medieval sites in the world,” said Schweger. “Then the Norse disappear, and the question has always been: what happened?”

The interesting question is why is a farm buried in the permafrost? The Middle Ages were warmer than the climate in the 21st Century.

Between the 10th and 14th Century was the “Medieval Warming Period” when global temperatures were higher than they are today. As the Vikings were not industrialised and no one has found a Range Rover with horns on the bonnet buried in the permafrost, the only conclusion is that the planet warms up and cools down periodically due to natural events. Were sea levels higher then than they are today? No.

When the Vikings arrived in Greenland they were able to build farming settlements, raise cattle and sheep and live reasonably well even though life was always hard because the first frosts arrived in August and the fjords were frozen solid by October. The question that has puzzled people for centuries is why did the Vikings disappear from Greenland around 1500 AD?

Latest evidence shows that as the climate cooled and Greenland’s ice sheet expanded life became too hard for the Vikings as they failed to take advantage of technologies from the Innuit people who were colonising northen Greenland. The lack of trees in Greenland made ship building very difficult and trade with Norway for wood and luxury items like spices and wine was crucial for the survival of the settlements.

In another recent find:

Knut Espen Solberg, leader of ‘The Melting Arctic’ project mapping changes in the north, said the remains uncovered in past weeks in west Greenland may also be new evidence that the climate was less chilly about 1,000 years ago than it is today.

On the Real Climate Blog Historical climatology in Greenland some scientists not from the Michael Mann school of closed minded stupidty have this to say:

All this to demonstrate that when people use vague generalisations – ‘models’ predict this, ’scientists’ say that – when there are specific data that could be used instead (which model? what period? which scientist?), be wary – they are usually trying to pull a fast one.

← The Iraq Inquiry – It Is Going To Be A Whitewash
Climategate – Whitewash In The UK, Rebellion In Australia →