Climategate – Copenhagen Failure And The Rapid Rise Of The Eco-Facist 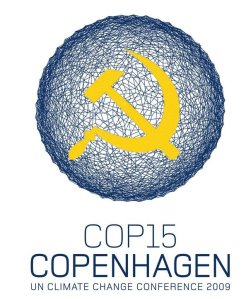 Literally within minutes of the collapse of the Copenhagen summit the eco-facists were looking for a new way to force their views and debunked science on us.

In a debate with Senator Inhofe, Inhofe pointed out that Obama had no power to give anything away at Copenhagen.
Prescott immediately jumped in and triumphantly declared that was not true as the US EPA has declared CO2 a danger to public health and that was sufficient; obviously democracy has no place in the Church of Climatology. Inhofe responded by saying that the EPA had NO POWER to override Congress as Climategate was now the subject of legal actions against scientists and institutions and that it was very likely that several scientists were going to face criminal charges for fraud.

Democracy and religion have never been comfortable bed mates and the Church of Climatology remains true to this rule.

In the Guardian Labour Grand Dame, Voice of the Proletariat and Tuscan property magnate Polly Toynbee lets rip about how the leaders know better than the people, who in some cases actually elected their leaders and expect their views to be represented.

James Delingpole in The Telegraph:

Sometimes we’re inclined to dismiss Polly as a loveable comedy figure, what with her lovely house in Tuscany contrasting so amusingly with her prolier-than-thou politics, and the never ending japesomeness of her deft, lighter-than-air prose.

But you know what? When she reveals her true colours, as she does here, I think she’s really, really scary. Her whole article teeters on the brink of demanding an eco-fascist world government to save us all from ourselves.

In the coming days expect more of the “we know better than you” smug attitude from those that will stop at nothing to force their global vision on an unwilling and unbelieving world.