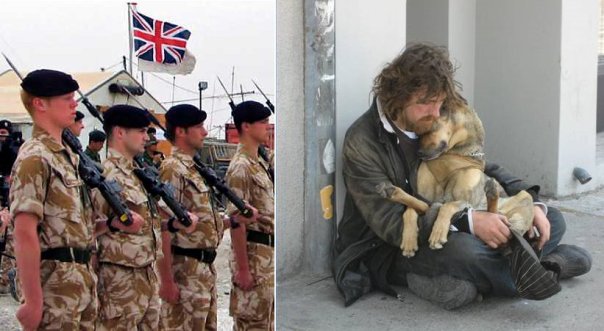 At this moment in time there are at least 70,000 ex-service men and women homeless in this country, it’s bad enough that they are homeless anyway, but in this freezing cold they are more vulnerable than ever. 70,000 is a number that is difficult to comprehend as a mass of people, let me quantify it, roughly the entire population of a small city like Bath sleep rough every night and everyone of these people have served their country.

A while ago I wrote a blog article about homeless ex-service people for another charity, I still can’t find better words to try and make the point so I am reusing it in part:

This country has failed it’s service and women consistently, and without exception, in the aftermath of every war since we became a so-called modern nation.

A war comes along, we call on our people to fight, and when it’s over we turn our backs on them.

The blame can be attached to every government, be they Conservative, Labour or Liberal, they have all failed monumentally.

More people who saw combat in the Falklands War have committed suicide since the war ended, than were killed in the fighting.

Think about it for a moment, it’s not only a scandal, it’s far worse than that as hundred’s of human tragedies are acted out alone and in the pit of despair.

“You think after serving your time in the Army society will accept you,” he says, “but they don’t and no one helps.”

Ray was on the streets. Aimlessly, he would jump barriers at stations and ride trains around the country. Eventually he ended up in West London. He could get through £400 worth of crack in two or three days. He no longer cared about sleep or food. On the streets the tough “wolf pack” mentality meant that he was vulnerable to sexual assault and violence.

In the end he smashed a car window outside a police station and turned himself in. When he was searched, the only things found on him were his medals. more in The Times

Aardvark is in regular correspondence with his MP regarding this tragedy and asks everyone, who reads this blog, to email or write to their MP, and demand an end to betrayal and failure of our brave service people and really give them “The land fit for heroes” they were promised nearly 100 years ago

People can fall through society and end up homeless for many reasons, for service people it can be for any number of reasons from the horrors of combat, to the difference in life between the services and being a civilian for the first time in many years.

Honour Our Forces has been setup to help ex-service people, this is their mission statement:

Many of you may wonder what motivates a person to create an organization like HONOUR OUR FORCES.
But if you closely read the three words, and while reading these three words, you then reflect on all the atrocities, committed around the world. In the name of either, Oppression, Religion, Territorial Occupation, or just plain and simple Sadistic Terrorism, that inevitably results, in our Armed Forces being deployed to fight. And all too often lose their lives to protect our safety.

Then, and only then, will you understand the dedication, and passion that drives me and my team, to raise awareness, and funds for the charities I have chosen to fund raise for.

Here is the welcome message from the President of Honour Our Forces:

I am proud and honoured to have been asked to become Honorary President of Honour our Forces.

I fully support your efforts on behalf of our Armed Forces, and deem it an Honour to accept your request.

I fully endorse Honour our Forces and its aims.

Any organisation that can attract Duncan Bannatyne as it’s President has a lot going for it, and with his legendary business and management skills Honour Our Forces is going to have a head start with the advice and guidance on offer.