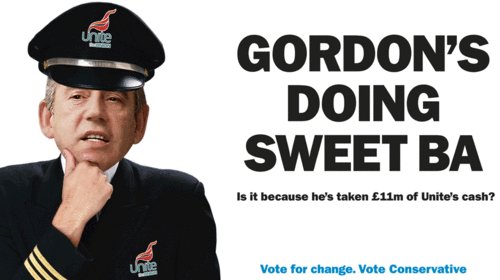 The most stupid  strike in recent years  is now into it’s first day.

British Airways are claiming that sufficient cabin crew have turned up for them to operate the published service, while Labour’s paymasters Unite are claiming well populated picket lines; nothing unusual in the rhetoric.

The strike has caused a storm in politics, but nowhere more so than in the Labour Party. Last weekend the Transport Secretary Lord Adonis had the temerity to blame Unite for the strike, the fallout was almost instantaneous with Labour’s paymasters calling Downing Street and telling them to muzzle Lord Adonis and that Unite should NOT BE BLAMED for the strike.

On Monday Gordon Brown was on the BBC Radio 4 program Womans Hour where he manged to utter a few words like “deplorable”, “wrong time”, “unjustified” but could go no further for fear of having the purse strings cut by Charlie Wheelan.

BA and many other airlines are in a very weakened state financially because of the recession, ever increasing Green taxes for the non existent AGW threat and the price of aviation fuel.

The last strike Unite attempted to call was at Christmas which caused a lot of disruption and worry for travellers then, to have called the strike for Easter which will again hit travellers at peak holiday time will not win Unite and Labour many friends. Then there is the knock on damage to BA, the number of people who will never fly with BA again because they have been let down for the second holiday period in row, the loss of revenue, none of which can make jobs at BA more secure. Then there is the impact on the many smaller companies who provide services to BA, when BA cuts back many of these smaller companies will go out of business and more jobs will be lost.

A Labour minister was quoted in The Telegraph yesterday as being very worried that the voters would perceive (correctly) that Labour was Unite Union’s friend, which is Labour spin for “my biggest fear is that the voters will wake up to the fact that Unite owns the Government”.

The question is who will voters blame for their cancelled holidays?