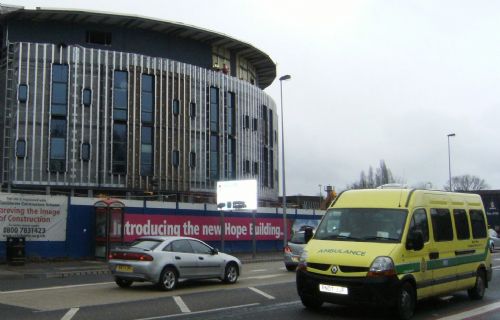 Hazel Blears is in the news again with yet more negative publicity this time concerning her husband Michael Halsall who has received £80K in fees as Salford Royal Hospital prepares to slash 750 jobs over the next three years as part of vicious Labour government cuts in NHS budgets.

The Salford Star has this to say:

Plans were leaked recently showing that the top rated Salford Royal Hospital aims to axe 250 jobs a year until 2013 in an effort to chop £16million from its budget. At the same time, Hazel Blears’ husband, Michael Halsall, will be earning over £13,000 a year as a `non executive director’ of the Salford Royal NHS Foundation Trust.

The Hospital Trust’s Annual Report shows that in the year ending 31st March 2009 Halsall attended a total of 19 board and committee meetings, which works out at almost £700 per meeting.

Back in September 2009, at a Council of Governors and Board meeting (to which Michael Halsall sent his apologies for not attending), the Hospital Trust’s Director of Finance told of “the end of the ‘growth’ period and the requirement of the NHS to reduce costs…and what this could mean in real terms for Salford Royal”.

These `real terms’ were spelt out in detail via a leaked letter to the Manchester Evening News, and included 10% cuts in primary, community, acute and mental health sectors by 2013, and 15% cuts in acute and in-patient mental health care by 2013

Hat tip to the Salford Star for story and picture.