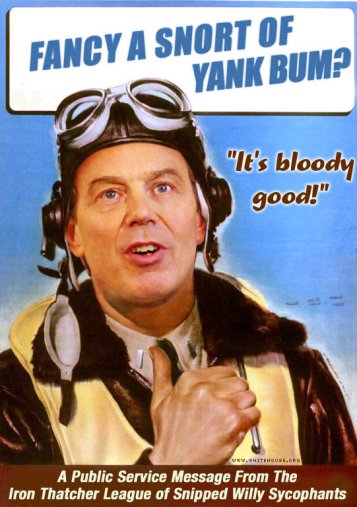 Blair takes a breather from having his nose up Bushs butt

It seems like a different life time ago that Gordon Brown lied to the Chilcot Inquiry.

Largely forgotten about with General Elections and Coalition Governments The Iraq Inquiry has rumbled inexorably along, but it only takes the name of former Labour Party Leader and War Criminal Tony Blair to bring the inquiry back into the headlines.

It is common knowledge that Labour Prime Minister Tony Blair lied to the House of Commons and the Country to get us involved in George Bush Jnr’s war in Iraq, where Bush junior was looking to finish off the job started by George Bush Snr 10 years earlier.

Former British Amabassador to Teheran Sir Richard Dalton, giving evidence yesterday at Chilcot, stated the Prime Minister (Tony Blair) made some “very bad” decisions in deciding to invade Iraq and had completely misread the situation about any possible Iranian reaction to the invaision.

So Blairs not only a liar he’s fucking stupid as well, pretty much representative of the last Labour government, Browns Government of All Talents (GOATs) was really a Government Of All Twats.

Sir Richard, who was in the job between 2003 and 2006, said Mr Blair assumed Iran would be hostile to the war but had misread the situation.

While Tehran did not want to give British and US forces an easy ride it ultimately wanted the coalition’s mission there to succeed, he told Sir John Chilcot’s panel.

“They were seeking to hurt the coalition without preventing the takeover of Iraq by an Iraqi regime that would be successful,” he said.

The Iranians did allow al Qaeda fighters to travel across their territory from Afghanistan and Pakistan but that was the extent of their support, he added.

His evidence appears to contradict what Mr Blair told the inquiry in January.

“What nobody foresaw was that Iran would actually end up supporting al Qaeda,” the former Prime Minister said, adding that Tehran feared having a functioning Shia-led democracy on its doorstep.

The very sad fact is that when mental midgets like Tony Blair make mistakes, errors of judgement, it’s not them or their families that pay the price in blood, death and destruction its ordinary people.

Could you imagine Tony and Cherie Blair giving Ewan an SA80 and sending him off to the meatgrinder in Afghanistan, to fight his fathers war?

About as much chance as finding tits on a bull.