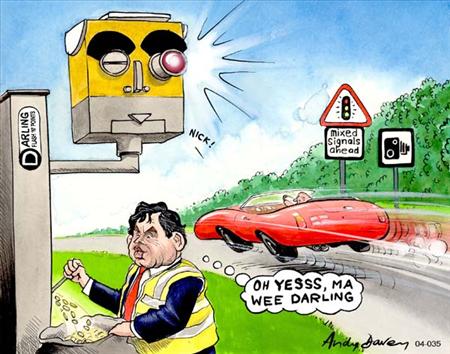 Under Labour GATSO were just another way to rape the motorist

The dismantling of the surveillance big brother state of Gordon Brown took another step forward today with announcement that Oxfordshire County Council is to turn off all 161,  of it’s speed cameras.

Under the car hating Labour regime of Blair and Brown it was never about road safety it was all about finding new ways to hit the motorist in the pocket and try to discourage the freedom that personal transport brings to people. A plethora of cameras for this or that offence, emission zones, congestion charging, bus lanes anything to make the marxist holy grail of public transport only a reality.

Totallymotor reports that road safety minister Mike Penning has announced that his new conservative government will stop financing the construction of speed cameras by local authorities, bringing an end to a decade’s worth of camera build-up. Penning tells local authorities that they are free to purchase cameras with their own money, but that the government will encourage the use of alternative safety measures.

Needless to say there’s already been some backlash prompted by the decision.Safety advocate Julie Townsend tells TM that

It’s vital that the government continues to invest in proven technology like speed cameras, alongside other crucial road safety measures like traffic policing and education. These measures not only help to prevent the unspeakable trauma of a sudden bereavement or serious injury, they also make good economic sense, helping to stem the huge cost to the economy of road death and injury

But this “economic sense” is precisely why speed camera funding is going away.

Full story The Truth About Cars

Aardvark is particularly pleased as a resident of South Oxfordshire this is good news indeed, as no longer will traffic speed along the road then suddenly break hard for the camera and speed up again.

One of the comments in the Truth About Cars post mentions mobile speed cameras being very effective, this in Aardvark’s experience is true. Between Wantage and Faringdon is a nice little village called Stamford in the Vale that is notorious for having mobile speed cameras, well they used to be there a lot, these days not so often, but Aardvark does not know anybody that would do more than 30 mph through Stamford at any hour of the day or night.

The mobile camera has done the job and improved safety, probably at the cost of reduced revenue from speeding tickets, but then it was always supposed to be about safety not revenue generation, and if you believed that you were probably dumb enough to have voted Labour at least twice.