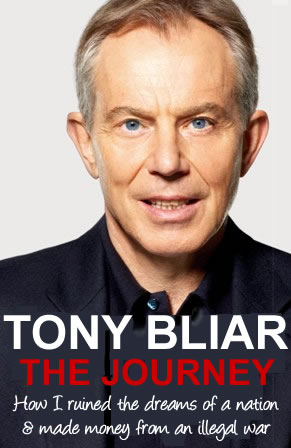 So the orange war criminal is going to give the profits of his book to the British Legion, on the face of it a generous and altruistic gesture but as it with all things from the über spinmeister, nothing of course is what it appears to be.

The grandmaster of smoke and mirrors is at it again.

The whole country has a good idea of the legacy of Blair and Brown so the first question is why pay out more money so that Blair can spin and lie away his time as Prime Minister?

Blair doubted that Brown was fit for purpose yet he willingly handed power over to an unbalanced mad man, the same man who failed to fund his master’s illegal war properly and due to his cuts and lies about defence spending, Gordon Brown has more blood on his hands than Tony Blair.

Blair is reckoned to earn about £9 million a year, so giving away the profits of his book is hardly going to hurt his pocket, and it’s the profits he is giving away not the whole sum paid by the publishers, so really he’s not giving anything away.

In the MSM there is speculation that Blair is giving the profits away to try to ease his conscience, effectively to buy forgiveness which says a lot about the man, and his standards and values.

Arrogant is not the word, does Blair imagine that building a sports centre will ease the pain of those who have lost loved ones, wake up Blair there is not enough fucking money in the whole world to undo the pain and suffering caused by the violent death and mutilation of people you love.

The profits of the book i.e. what is left after expenses and we know by the speed at which Blairs Parliamentary expenses claims were shredded that Blair and Cherie are as the Americans say “real good at expenses“.

There are 2 major benefits to this:

The British Legion gets more money