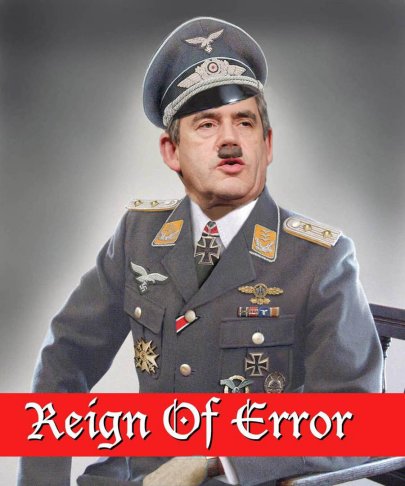 There is quite often a vastly different perception in a politicians standing in his own country, when viewed from abroad. Today is 10/10/10 and the warming alarmists are taking a day off from producing exploitive and degrading images of children to bother rabbits and molest trees.

On such an auspicious day no other than Gordon Brown has come out with yet another message about Climate Change and the eco mentalists at the Huffington Post seem to think this is the endorsement of a lifetime, because former Prime Minister Gordon Brown has spoken in favour of the ManBearPig religion again, see what Aardvark means about a difference in perception.

In the last year Gordon Brown the weakest politican of his generation, a pathological liar who betrayed this country’s Armed Forces, a man who no matter how many times he added 2 + 2 never got 4, has tried to sell the AGW Hoax as 50 Days to save the world, anyone who did not believe in AGW was a flat earther, fear, fear, and more fear, science deniers and now well it’s really a great business opportunity to give all our money away.

Those of us at the vanguard of climate change action have always understood that the environment is beyond price. Without a clean and sustainable world we will simply cease to be. But now we can add economic common sense to the argument for change — because growth and new jobs for today’s 2OO million unemployed global workers can come from environmental strategies based on low carbon technologies. The challenge of climate change is not just a moral issue for our time, but an opportunity to make the world’s economic future stronger and more secure. Full story here

Brown’s own party have tacitly abandoned Climate Change, guess nobody told him before he made am idiot of himself, again.

Those of us at the vanguard of climate change action, maybe in Browns own deluded mind he is indeed at the forefront of Climate Action, but tell Aardvark Gordon, what difference did you make at COP15 apart from leading Al Gore into a broom cupboard and being shut out of all the main events.

Brown never even got the chance to stick his nose up Obama’s butt before the snow came.