Cyclone Yasi – It Was Caused By Climate Change 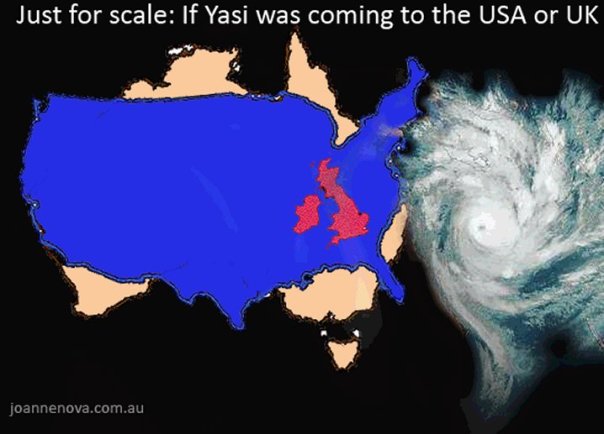 It’s a fair bet that just about anything is caused by Anthropogenic Global Warming these days, as the pillars of Al Gore’s once great Climate Religion come crashing down, everything is our fault and guilt abounds.

First the civil unrest in Egypt was caused by Climate Change according to NGO Climate Progress, and now the Australian Greens are blaming AGW for Cyclone Yasi.

With an awesome cherry picking of data from the last 100 years the ecomentalists have outdone, even Danny Glover for sheer eco stupidly as the ever excellent Jo Nova points out

For all the other Christine Milne’s out there, who think coal mining causes cyclones, the empirical evidence inconveniently declares that super-cyclones have been hitting Queensland regularly for the last 5000 years.

As usual, it’s the name-callers who cling to 100 year time-frames and deny the long term evidence, while we cherry-picking denialists gravitate towards long term studies based on real observations. (The evidence lies in an obscure industry newsletter called Nature.) The way researcher, Jon Nott, describes it, things have been unusually quiet in our high CO2 world for the last few decades, but cyclones used to be a lot worse, and “worse” is coming back.

Thanks to The Australian for putting together a very timely piece about the historical pattern of cyclone activity.

In a paper published in the scientific journal, Nature in 2001 his research shows the frequency of super-cyclones is an order of magnitude higher than previously thought.

Nott’s work puts into perspective current debate about whether climate change is responsible for the extreme weather events in Queensland.

Over recent centuries, massive cyclones have been relatively common. And after an extended period of relatively little activity their return is overdue regardless of rising global temperatures.

Christine Milne is deputy leader of the Australian Greens and had this to say to ABC:

The Australian Greens say Tropical Cyclone Yasi is a “tragedy of climate change”.

The party was heavily criticised after it linked the Queensland floods to climate change and blamed coal miners.

Greens deputy leader Christine Milne says the cyclone is another example of why it is important to cut carbon pollution.

“The scientists have been saying that we are going to experience more extreme weather events, that their intensity is going to increase, their frequency.”