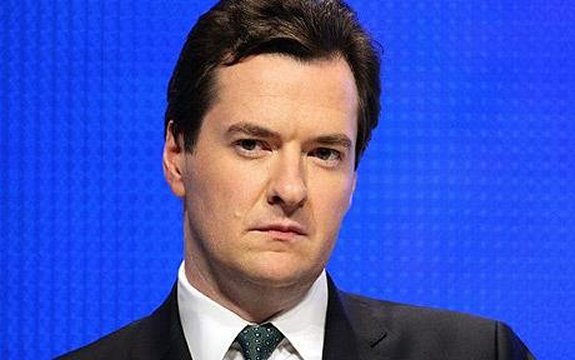 At the Conservative Party conference the Chancellor, George Osborne has said it is time to stop the insanity of the Greens:

George Osborne has vowed that the UK will not lead the rest of Europe in its efforts to cut carbon emissions, raising the prospect that the country’s carbon targets could be watered down if the EU does not agree to more ambitious emission reduction goals.

In a potentially explosive intervention, Osborne insisted the government will only cut emissions in line with its neighbours in order to ensure British businesses are not put at a disadvantage.

Speaking at the Conservative Party conference on Monday, the Chancellor accused environmental regulations of “piling costs on the energy bills of households and companies” and argued that the government should not adopt green targets that damage the business sector.

“We’re not going to save the planet by putting our country out of business,” he said. “So let’s at the very least resolve that we’re going to cut our carbon emissions no slower but also no faster than our fellow countries in Europe.”

He also stressed the UK accounts for less than two per cent of global greenhouse gas emissions, compared to 40 per cent from the US and China, warning that if the UK attempts to cut emissions too quickly carbon intensive businesses will simply migrate overseas.

The sound in the distance is Huhne wailing and gnashing his teeth, Huhne is no stranger to being bitch slapped by George Osborne and heresy like this will put Huhne and Osborne on a collision course, the likely winner being Osborne again.

There is cautious optimism that Dave might at last have heard his advisors, the CBI and the Manufacturers Association about the ludicrous costs of renewable energy and the huge tax payer funded subsidies that are handed out to make the renewables economically viable.

One thing is for sure with nearly 6 millions households in energy poverty it is time that the War on Affordable Energy being waged by Chris Huhne, Caroline Lucas and the EU was stopped, otherwise with another cold winter on the way more of our old people will die of the cold, because they are to frightend to put the heating on because of the cost.

Energy poverty hits hard on the most vulnerable in society, the old, the poor and damages the industry that should be providing new jobs, none of this matters to millionaire climate zealots like Huhne who has no worries about the finding the money for his next energy bill, he spares no thought for those that suffer in his Green crusade they are just collateral damage, martyrs in Huhne’s war on Affordable Energy.