Britain The Political Consensus On Global Warming Is Dead 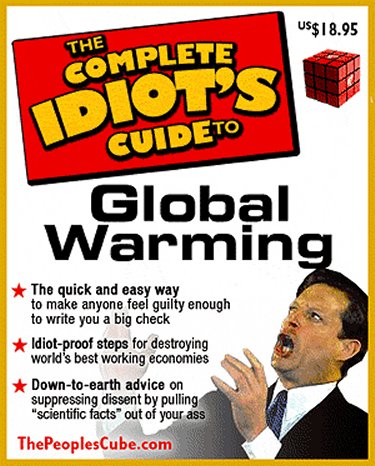 No longer believed by Dave because votes are at stake

The Conservative Party Conference this week has been a major turning point in the decline of Climate Religion in Britain, with Chancellor George Osborne talking complete sense about the stupidity of Britain going it alone and committing economic suicide so Britain can lead by the example, in the fight against an inert trace gas that is essential for plant life.

In the cosy world of Climate Religion belief, the Liberal Elite believed that a barrage of fear stories, grey propaganda loyally regurgitated by Main Stream Media and hijacking the IPCC would be sufficient to force their brave new Green world on everyone else, now the Green bubble has burst, the eco mentalists are hurt, shocked and trying to spin a damage limitation exercise.

Damian Carrington at the Guardian whose dreams of pre Agricultural Revolution Britain where the self appointed Carrington knows best, are in ruins: which does tempt Aardvark to paraphrase Colonel Kilgore “I love the smell of shale gas in the morning, it smells like a victory for common sense over religious dogma“

Business Green are in tears as they can see risk free investment funded by the Golden Goose of the tax payer is at an end, and that like other businesses have in the past, they will have to use their own money to take risks.

Cameron and Osborne sound death knell for “greenest government ever” pledge with complete sidelining of low carbon economy. The political consensus that defined action to curb carbon emissions and tackle climate change is drawing to a close.

Has there been a more anti-environmental political conference at any point over the past decade than this year’s annual Conservative Party jamboree in Manchester?

The answer is almost certainly not, and after a week of high carbon policy announcements and sidelining of environmental issues the hard fought political consensus on the urgent need to create a world-leading low carbon economy looks to be under serious threat for the first time in a decade.

If you look at the handful of environmental announcements that have emerged in the past few days it has provided explicit confirmation that large parts of the largest party in the coalition are not signed up to the UK’s low carbon agenda, are actively lobbying for it to be scaled back, and are in some cases tearing off in the opposite direction.

The disproportionate influence the Lib Dems have had on this government seems to be waning, Chris Huhne’s announcements about stopping the shale gas bonanza at all costs because of CO2 targets have not gone down well, frankly when tabloids like The Sun and The Daily Mail are telling their readers the truth about the costs of renewables on their readers ever increasing energy bills, the genie is well and truly out of the bottle.

Electricity market reforms, the Green Investment Bank, the Green Deal, the Renewable Heat Incentive, they will all continue apace, creating huge commercial opportunities for low carbon businesses and investors. Similarly, global climate change risks, surging investment in clean tech, and rising energy prices and supply insecurity will all continue regardless of whether or not the prime minister chooses to mention climate change in his speeches. The fundamentals driving the low carbon economy remain as robust as ever, and progressive businesses understand this implicitly.

Now the spin, the Green Investment Bank that is not a bank and never will be, the Green Deal that never was or will be, the Renewable Heat Incentive in an amazing twist of irony brought to a shuddering standstill by the EU.

Rising energy prices will be slowed down when shale gas comes on the line and tax payers stop subsidising bird choppers and solar panels.

However, at the same time it appears that the political consensus that defined action to curb carbon emissions and tackle climate change is drawing to a close.

An erroneous argument that will doubtless be used by the warming alarmists concerns the Climate Change Act 2008 and Britain’s post 2020 CO2 targets:

Many journalists and green campaigners mistakenly believe that the UK’s post-2020 carbon targets are legally binding under the UK’s Climate Change Act. In reality, however, the fourth carbon budget has made these targets (35% carbon cuts by 2022 and a 50% reduction by 2025) conditional on international agreements and developments. Moreover, not even the 2050 carbon target is set in stone.

“According to the Climate Change Act, the government may amend the Act’s emissions target if it appears that there have been significant developments in European law or policy that make it appropriate to do so. Given the EU’s manifest reluctance to follow Britain’s lead, the time has come to suspend all unilateral climate targets and amend them along EU lines,” Dr Benny Peiser, the GWPF director said.