← Prince Philip Wind Farms Are Absolutely Useless And A Disgrace
Climategate 2.0 Getting People We Know And Trust Into IPCC Is Vital → 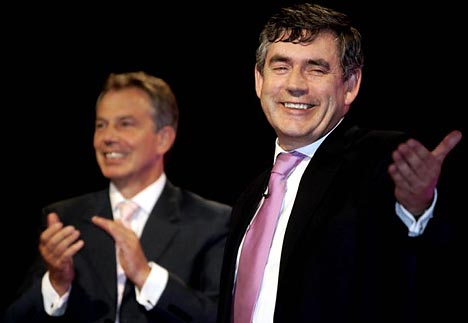 The cause of your ever rising energy bills, all so Blair could play the Great I Am on the world stage

Labour’s legacy to Britain has been horrendous, incredible debt from a deliberate scorched earth policy of profligate spending, unfettered immigration to force the disaster that is multiculturalism on Britain and the deliberate destruction of pension schemes to name but three.

The latest sting in the tail to float up from the bottom of the Labour Socialist cesspool is the ever increasing cost of energy,  all brought about so Tony Blair after having his illegal war in Iraq could continue to play the “Great I Am” on the world stage.

Wind farms are Blairism incarnate. Wanting to look big on the international stage, he committed Britain to some preposterously over-ambitious targets for reducing our greenhouse gas emissions. As ever, this was glittering, shop-window stuff, the bill for which would somehow be obfuscated by the dour Scot in accounts. After due nail-biting, Brown came up with a system so convoluted that most people have only just realised that the person who ultimately pays is the consumer.

We are all generously subsidising the wind farms which many of us hate through our electricity bills. Why? Because unlike other forms of renewable energy, which would have required the Treasury to build huge civil engineering projects, the cost could be met through a trade in Renewable Obligations Certificates (ROCs). It works like this. Power companies are required by law to provide a proportion of green energy and if they don’t meet the target, they are fined. But they can avoid the fine if they buy-in green energy credits, which are traded in the shape of ROCs.

The money from selling ROCs is far more attractive to the wind farm speculators than the value of the energy itself. The power companies simply pass on the cost to the poor sap who buys their electricity. It’s Machiavellian. Worse, it’s Brownian — and, as the Duke says, a disgrace. But from the Blairite shallows, it was much better than having to confront a decision that might have incurred short-term unpopularity, but is all but inevitable for our future energy security: the building of more nuclear power stations.

As jobs are lost, more than 6 millions homes slide into energy poverty it is comforting to know that the man who has made millions out of his being Prime Minister caused all this because the longest time frame to any left wing socialist is the time it takes to jerk their knee, and god forbid that the Labour party should have incurred anything so bad as short term unpopularity.

It is hardly surprising to find the hand of Gordon Brown involved, obfuscating the real truth as to who paid for Blair and Brown’s desire to be thought of as world class politicians.

Blair and Brown are both staunch believers in the wealth redistribution scam that is Anthropogenic Global Warming, Blair famously said that even if the science is wrong the world must still commit economic suicide, while Brown tried to frighten the hell of the British public in the run up to COP15 in Copenhagen with his scary tale of their being only 50 days left to save the world, the only thing scary about that was the dour Scottish cyclops with enough personality disorders to keep an entire university department busy for decades and a charisma bypass operation that was hugely sucessful.

← Prince Philip Wind Farms Are Absolutely Useless And A Disgrace
Climategate 2.0 Getting People We Know And Trust Into IPCC Is Vital →