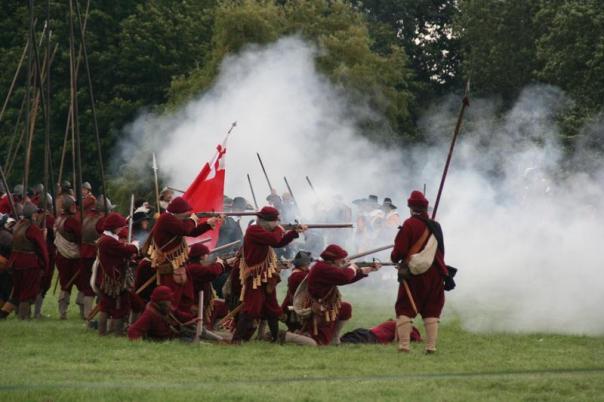 1645 Battle of Naseby, the outcome lead to the modern Parliamentary system Britain has today

A report by economist Ruth Lea has found what many people have been saying for years now, wind power is unreliable and costs many times more than electricity generated by coal and gas fired power stations.

There is something deeply wrong about a system that pays turbine operators millions of pounds to not generate electricity when people and business are struggling with ever rising energy costs.

The insanity continues as a decision to stop a wind farm being built that  overlooks  the site of the Battle of Naseby has been overturned despite officials acknowledging that the turbines will impact heavily on the historic site.

Europe’s focus on wind power is crippling British energy users with additional costs as it is not a cost-effective way to reduce carbon dioxide emissions, a report has found.

The EU has directed governments to generate 15 per cent of energy from renewable sources by 2020, leading many to focus on wind.

It means energy users pay twice – once for the ‘window-dressing’ of renewables and again for fossil fuels the energy sector continues to rely on.

The study, written by economist Ruth Lea, uses Government-commissioned estimates of the cost of electricity generation to calculate the most cost-effective technologies.

The report concludes: ‘Wind power is expensive and yet is not effective in cutting CO2 emissions.

Doubtless the report will be ignored by Chris Huhne and the other Climate Zealots in the EU and Huhne’s Follies will continue to be built regardless of any concern while a few individuals and the big energy companies grow rich on Green taxation.

A WIND farm can be built next to the Battle of Naseby site in Northamptonshire, despite officials admitting the large turbines will ‘harm its setting’.

Last year, members of Daventry District Council blocked plans to build turbines to the north of Haselbech, near Naseby, because of the impact the development would have on the area.

But this week, national planning inspector, Paul Griffiths, overturned that decision, meaning six turbines up to 415ft tall can be built.

In his report, Mr Griffith said: “The wind turbines would introduce another modern element into views into and across the battlefield.

“Their presence would act as a further distraction that would make interpretation more difficult. This would detract from the significance of the battlefield and harm its setting.

The Battle of Naseby was the turning point in the English Civil War when Parliaments New Model Army decisively defeated the army of King Charles I, the direct outcome of the Royalist defeat is the Parliamentary system Britain has today and the model for Parliaments in many countries of the world today.

Europhiles like Huhne, and the other Lib Dems in the Vichy Government cant wait to surrender the powers of Britain’s Parliament to the EUSSR, so dont expect any action from Huhne or his lackeys in DECC to stop the turbines going ahead.