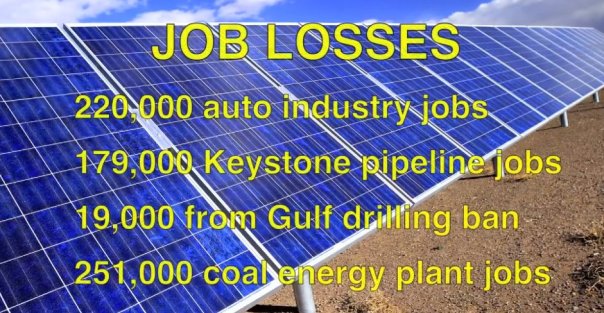 Barack Obama has started his bid to have another 4 years as President for a second term.

Having already set new lows in his approval rating Obama is now claiming that his environmental policies have created 2.7 million clean energy jobs, the only problem with that claim is the jobs already existed before Obama became President.

Desperate to appease his Green ecomentalist supporters Obama cancelled the Keystone XL pipeline that could have provided around 180,000 jobs in the next 20 years.

• The Canadian Energy Research Institute estimated that the recently killed Keystone XL Pipeline would have created 179,000 American jobs by 2035.

• The House Energy and Commerce Committee website cited the statistics of Professor Joseph Mason of Louisiana State University: Obama’s Gulf of Mexico drilling ban will result in $4.4 billion in lost economic output and 19,000 in job losses.

Regardless of clean energy’s economic viability, no elected official should get away with misleading taxpayers and voters to this degree.

“misleading taxpayers and voters to this degree“, well Obama is a socialist with a Green agenda, what the hell did you expect?