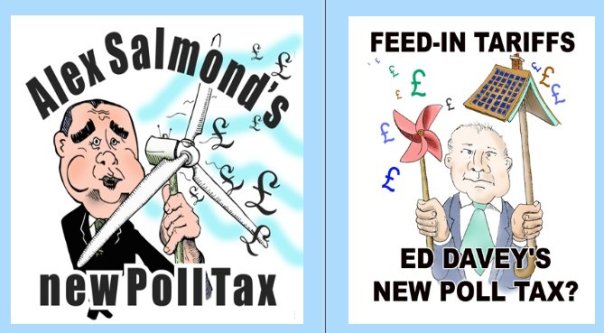 The opposition to wind farms in Britain is growing daily, leading the fight in Scotland is the Caithness Windfarm Information Forum (CWIF) who are taking the protest to the Scottish Lib Dem’s spring conference.

Lyndsey Ward of CWIF made a speech to wind farm protestors:

On 3rd Feb, as soon as Ed Davey was confirmed as Chris Huhne’s successor, I wrote to Mr Davey requesting he meet with us. I have made several attempts to secure a meeting with Mr Davey making absolutely clear how serious our concerns regarding industrial wind farm development are, but I have never had the courtesy of a reply, acknowledgment or read receipt from him or his office. I heard through the Lib Dem office in Edinburgh only on Thursday that his busy schedule would not allow a meeting. It would seem that Mr Davey is not too busy to speak to the renewables industry, but is too busy to hear about the people whose lives have been so adversely affected by wind farm development.

No surprises from Davey there, the Green Agenda overrides everything if wind turbines are involved, the Raptor is just one casualty of the Green environmental movement, sold out in the name of renewable energy.

With growing numbers of scientists, engineers, economists, environmentalists all opposing industrial wind farm developments why is nobody at the top listening?

Here today we have the Liberal Democrats meeting. No doubt patting themselves on the back for being in government at Westminster and shaping policies across the UK.

Nick Clegg is reported as wanting the dockyards in Scotland reopened as wind farm factories. I bet he does. You don’t live here Mr Clegg. We don’t want your vision of wind factories here.

Unless “Little Nicky” Clegg knows a way that any factory in the EU can produce anything cheaper than China then any wind turbine factory is ultimately doomed without Green subsidy to lower prices.

It is a highly visual ‘tick box’ exercise so the politicians here in Scotland and in Westminster can puff themselves up and say
‘Look what we are doing to save the planet’.

Yes let us take a brief look at what they are doing shall we?

They are offering excessive rewards to developers to build their wind farms in our communities and precious landscapes even though most of us don’t want them.
That is our money they are offering.

They are allowing the wind farm developer to offer huge rewards to landowners for simply having turbines on their land.
That is our money they are offering.

The same developer offers the communities a monetary benefit if they achieve approval to try and gain support and secure planning.
That is our money they are offering back to us.

With the recent condemnation of wind farms by Prime Minister David Cameron who said they were “over subsidised and wasteful of public money” the end of the wind farm scam is in sight.

The Green campaigners and unelected NGO’s are beginning to realise that the whole AGW scam is over and that no matter how loudly they wail no one will listen, apart from other like minded water melons.