The Planet Has Not Warmed In 15 Years 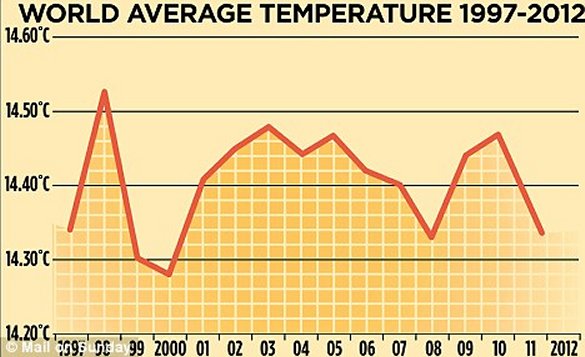 The Hadley Centre for Climate Prediction and Research (HadCRUT) has long been the gold standard in climate data used by the IPCC, now a new analysis of the data by the UK Met Office shows there has been no global warming for the last 15 years.

The global temperature has remained static at 14.44 +/- 0.16 deg, which is considerably different to the continued increase of .2C per year predicted by the warming alarmist computer models.

Global warming simulations, some carried out by the UK Met Office (here, here and here), have been able to reproduce “standstills” in global warming of a decade or so while still maintaining the long-term 0.2 deg C per decade average. These decadal standstills occur about once every eight decades. However, such climate simulations have not been able to reproduce a 15-year standstill:

“Near-zero and even negative trends are common for intervals of a decade or less in the simulations, due to the model’s internal climate variability. The simulations rule out (at the 95% level) zero trends for intervals of 15 yr or more, suggesting that an observed absence of warming of this duration is needed to create a discrepancy with the expected present-day warming rate” (NOAA 2008).We also note a comment in an email sent by Professor Phil Jones of the University of East Anglia Climatic Research Unit: “Bottom line – the no upward trend has to continue for a total of 15 years before we get worried.”

By “getting worried” Phil Jones does not mean the Climate scientist cabal would  be worried about some dreadful event be falling humankind because of climate change, Jones is worried that he and his fellow junk scientists will be shown by the facts to be wrong.

Above research grants and fame, there are certain vainglorious scientists that seek the immortality of Newton and Einstein, there were many who saw the Global Warming Hoax as just such an opportunity.

Now the hoax is coming apart faster each day their chance for scientific immortality, in the way they were hoping for is gone, there are likely however to be remembered as a bunch of junk scientists who made up data and fear stories for a Green political agenda.