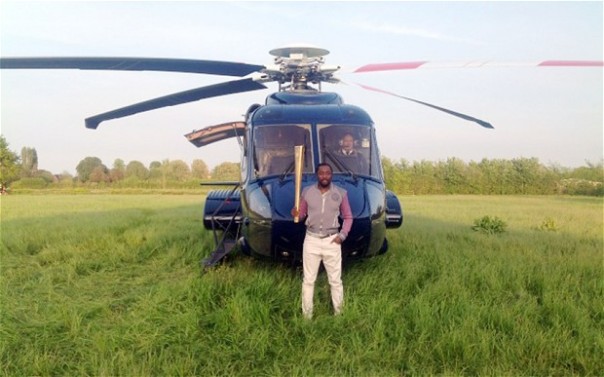 The warming alarmist industry has proved an irresistible draw to hypocrites, liars, fools, knaves and champagne environmentalists, like U2 front man Bono who advocates writing off third world debt with tax payers money, while avoiding paying any tax himself.

Even the saintly Sir Bob Geldorf has efficient tax affairs, just like Bono, another caring celebrity, only with other people’s money.

Next month 50,000 caring ecowarriors will fly to the Rio+20 Earth Summit, emitting thousands of tons of the CO2 they fear so much, all so they can save the planet from other people flying and burning fossil fuels, so it comes as no surprise that when ecowarrior and Black Eyed Peas rapper Will.i.am attended a meeting at Oxford University on Climate Change, he chose to arrive by helicopter, and then cycle the last few hundred yards.

Despite his environmentally-conscious stance on green issues, the Black Eyed Peas rapper, 37, chose to take a private helicopter to the venue.

It is understood the journey, which is a 286 mile round-trip from London, used 71.5 gallons of fuel and released three-quarters of a ton of CO2 into the atmosphere.

He even tweeted pictures of the so-called “hip.hop.copter” for fans to admire, after landing at the Oxford’s University Parks.

From there, the singer used a pedal cycle to travel the remaining few hundred yards to the Radcliffe Observatory Weather Centre.

There, he told an audience: “Climate change should be the thing that we are all worried and concerned about as humans on this planet, how we affect the planet,  our consumption, and how we treat the place that we live in.”

Worried about consumption, 4 miles to the gallon in a helicopter, this must be the new champagne celebrity benchmark for hypocrisy, but naturally this does not matter, because Will.i.am has written songs about climate change says warming alarmist Miles Allen:

Professor Allen told the newspaper: “The irony didn’t escape everybody. But he’s committed to the issues and he’s written songs about it.”

“A better understanding of the problems is probably more important than whether Will flies a helicopter from London to Oxford.”

Absolutely breathtaking hypocrisy, what do they call it when the hypocrites compound hypocrisy with hypocrisy? Oh yeah, Warming Alarmism.

Strangely the Guardian can actually see the hypocrisy here,  Duncan Clark in an article entitled “Will.i.am arrives by helicopter for flying visit to climate debate” wonders if Green champagne celebrities do more harm than good to the cause:

While I strolled back to train station, I looked up him up on Twitter and read that he was “about to leave Oxford in the hip.hop.copter”. I found myself feeling a bit torn. On the one hand, it’s hard to believe that we can make much progress if our green stars travel around in vehicles that get as little as one mile to the gallon

Rich Liberal hypocrites are definitely not a winner, but then neither are years of failed environmental Armageddon events much of a winner either.

Posted on May 24, 2012, in Anthropogenic Global Warming, Church Of Climatology, Climate Change, Green Lies, Junk Science and tagged Do As I Say, Dont Do As I Do, Environmental Hypocrite, William Adams. Bookmark the permalink. 3 Comments.