Wind Turbines – The Cash Machine That Keeps Paying Out 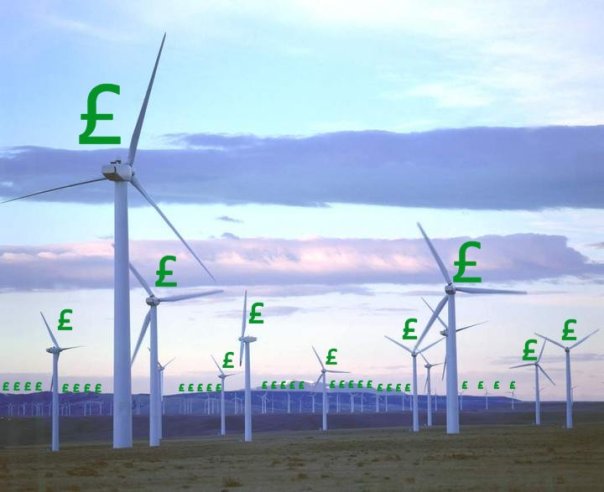 Wind and solar energy cannot exist without the lifeblood of subsidy,  or Green taxation to call it by the correct name.

The sums of money available to a wind turbine operator over a 20 year period are astronomical:

Let’s say you apply for planning permission to put one 500kw turbine up on your land. You get it, and you put the thing up before October (when subsidies are to be cut slightly). Then it operates at about 35% of capacity.

Getting it up will cost you something in the region of £800,000 – £1m, based on providers I’ve asked (depending on the turbine and the terrain). Let’s say £900,000 for the sake of argument. But you’ll then get paid 20.6p per kilowatt hour of energy produced, something that will bring you revenues in the region of £310,000.

Your annual take? It is well over £200,000, even if there are expenses I haven’t thought of (or been told about). But it gets better. Your income is inflation linked. So as the real value of the debt falls, the real value of the payments you’ll get will stay the same. For 20 years. That means your take, in real terms, over the lifetime of your subsidy guarantee, is going on £4,500,000.

The costs are even greater because wind is an unreliable power generation source, so there has to be a coal/gas/nuclear power station on standby to meet peak consumer demand, which adds still more to the cost of electricity generation.

Who is paying for this?

Every energy bill payer in Britain is being forced to pay for the renewable energy boondoggle which benefits big corporations, rich land owners and the watermelons who can say the renewables industry is growing year on year.

The problem is, it is not real economic growth just the usual socialist wealth redistribution scheme, which in this case takes from the poor and gives to the rich.