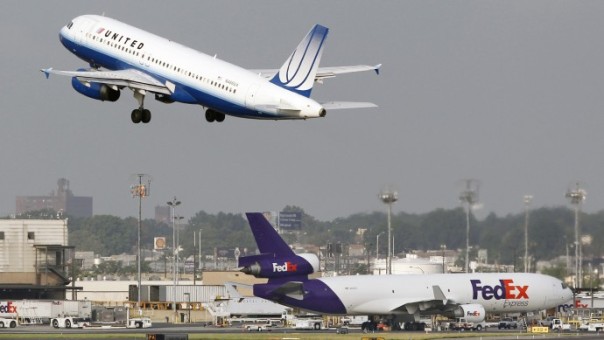 Another setback for Connie Hedegaard, the EU flying Tax is set to be suspended

January 1st 2012 the EU announced that it was unilaterally imposing a flying tax on all flights in, and out of the European Union.

The news of the EU Carbon tax on flying was greeted with global hostility, even before the tax became law China was warning of a trade war with the EU, by January 5th 40 Nations were opposed to the Green taxation, and by early February 2012 China and India had both decided not to submit any data to the EU Emissions Trading Scheme (ETS).

The EU’s Climate Commisar, Comrade Connie Hedegaard was typically Green blinkered and insisted the EU would force this flying tax on the world:

In May the Guardian ran a story saying that the EU hailed its own flying tax a success:

More than 99% of all major global airlines have complied with the first step of Europe’s controversial scheme to charge them for their carbon emissions.

The inclusion of aviation in the European Union’s emissions trading system (ETS) from the start of 2012 caused uproar from airlines in more than 20 countries including the US, China, Russia and Japan, but virtually all submitted the required baseline emissions data for 2011. Only eight Chinese airlines and two Indian ones did not comply by the 31 March deadline.

Connie Hedegaard, the European commissioner for climate action, said: “To put these figures into perspective, these [10] airlines represent less than 3% of total aviation emissions. So the bottom line is more than 1,200 airlines from all other countries but China and India have complied: implementation of the law is there.”

EU member states have contacted the Indian and Chinese airlines to remind them of their obligations, said Hedegaard, and extended the deadline until mid-June.

September 2012 has not been Hedegaards month, earlier in the month Hedegaards blinkered Green zeal to destroy Europe as a manufacturing base with 30% emissions cuts was brought to halt by the faceless officials of the EU, who announced at the pre COP18 meeting in Bangkok, that 25% cuts were wishful thinking.

European officials signaled Tuesday that they may recommend the suspension of the continent’s carbon emission fees for airlines to avert a trade war with major economic powers such as China and the United States, allowing time to forge a global agreement on climate charges for the aviation industry.

China and India have prohibited their airlines from participating in the European Trading System because it will require airlines that fly to and from Europe to buy permits for all the carbon they emit en route, a measure they say infringes on their sovereignty. Beijing has also blocked purchases of European aircraft by its carriers — prompting alarm from Europe’s aircraft maker Airbus, which sees China as its fastest-growing market.

In Washington, too, the Senate is considering banning U.S. airlines from complying with the EU law.

Maybe just maybe, had the Rio+20 car crash been broadly supported then Comrade Connie might just have forced her will on the world, it was noy very likely then, now in the post Rio+20 world, no chance at all.

A trade war was threatened if the EU flying tax were imposed, rich unelected Green zealots like Hedegaard disregard the economic fallout of their religion, but at least there seems to be a degree of economic reality creeping in to the EU bureaucracy at last, the last thing the virtually bankrupt EU needs is a trade war with the rest of the world.

With Airbus, a big European employer, warning of serious commercial consequences if ETS for airlines comes into force next year, officials stressed the need to act fast.

“Airbus today has left us in no doubt that the threat of retaliatory action is a clear and present danger to their order list,” said Michael Fallon, Britain’s business minister. “We are very aware that the clock is now ticking,” he added. “It really is important that we find, across the world, a solution to this.”

With the Kyoto protocol due to expire at the end of this year, and no prospect in sight of an extension or replacement, then a globally agreed flying tax will never happen, assuming it even makes the agenda at next UN COP failure in Doha.