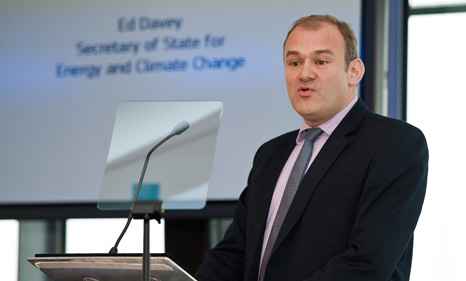 Britain’s very own Climate Change fool, Liberal Democrat Secretary of State for Energy and Climate Change Ed Davey is on the warpath against the heretical non believers in his Climate Religion.

According to Davey the right wing media provides a platform for AGW sceptics to have their point of view heard, this is of course outrageous to Davey’s mind, enfeebled as it is by Liberal thought processes. The twenty years of pro AGW propaganda from most mainstream media outlets, the continuing sycophancy for the AGW scam by the tax payer funded BBC, Channel 4 and the Guardian are not enough for Davey and the other warming alarmists, who want nothing more than a total news blackout on anything that contradicts the religious scriptures of Nicholas Stern, Michael E Mann, Phil Jones et al.

Anything that contradicts the scriptures of Anthropogenic Global Warming, like observed empirical evidence for example, something to be avoided at all costs.

Davey’s campaign continued with a speech to the warming alarmists at the UK Met Office Hadley center where Davey preached the same tired old AGW propaganda texts to the converted at the Met Office, the content is the same usual predictable Green drivel about impending doom, gloom, Green jobs and the carbon free economy.

What is interesting however is the change of emphasis in one of the classic Green lies: “97% of scientists are in consensus” this changed a bit, to say the least:

97% of the climate experts who expressed an opinion agree that human activity is driving global warming.

The sheer blinkered stupidity of Davey and the warming alarmists is clearly demonstrated again when Davey gets on to the topic of Britain leading by example and the rest of the world following:

Let me set out how the UK is determined to make this happen by taking action at home, in Europe and on the global stage.

Here in Britain, building on the groundbreaking Climate Change Act of 2008 enacted under the previous Government, we are now acting to meet the domestic emissions targets we have set ourselves.

Davey and the other Liberal minded Green evangelists learn nothing from life, their view of the world forever disjointed by rose tinted glasses, no one is going to follow Britain over the economic precipice of a Green economy, even the EU have recognised this fact:

>German MEP Holger Krahmer ‘The EU is starting to realise we achieve very little by setting targets for ourselves when the rest of the world won’t, while rising bills are plunging families into poverty.’

The EU have at last recognised the fact that no one else is going to follow their lead, but sadly Britain’s climate change fool cannot see anything but his Green dream and will continue to do his very best to cripple Britain’s economy until the men in white coats take him away.