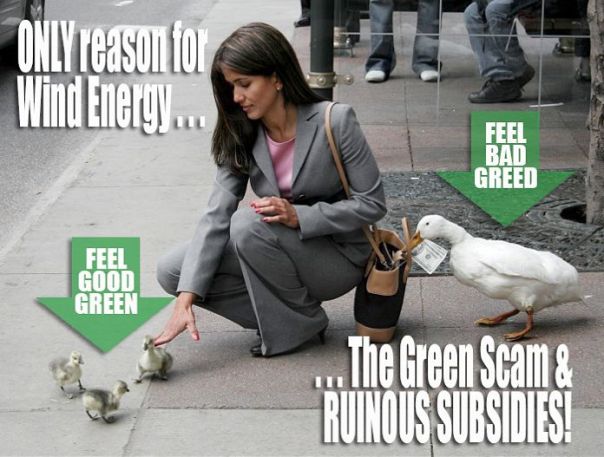 Wind and solar power have caused a deficit of more than 26 billion euros in Spain’s energy market.

Spain was one of the first European countries to Green their economy and use the German Green Energy subsidy model, driven by the socialist zeal of the then Spanish government, going Green was done literally at all costs.

The Great Man Made Global Warming boondoggle was always a cause espoused by the left, the bright Green future of renewable energy, the millions of Green jobs that would be created, prosperity and wealth from cutting edge Green technologies would flow endlessly as the rest of the world rushed to embrace the brave new Green world, bit of shame really, all in all, that the Green pipe dreams, like their Green Armageddon scenarios of global climate catastrophe, failed to happen.

The real cost of going Green to Spain has been horrendous, every Green job that was created killed 2.2 jobs in non Green industries, as the costs of the Green subsidies mounted so the new Spanish Government started to cut the subsidies for wind and solar and the familiar story of the Green death spiral started.

If that were not bad enough, now Spain’s Green Chickens have come home to roost in their eco friendly sustainably sourced coop:

Further cuts are expected this summer.

State subsidies to clean energy producers have already fallen by between 12 and 40 percent on average in recent years, industry analysts say.

They could fall by another 10-20 percent in a new energy sector reform expected mid-July, according to the Spanish media.

“The punishment meted out to renewable energies in the past five years amounts to more than six billion euros ($8 billion),” said Sergio Otto, secretary general of the business group Renewables Foundation.

“In the wind turbine industry alone we have lost 20,000 jobs and in the solar energy sector it’s probably more,” he said.

Green jobs, like the 20 year CO2 scare are just mirages, real jobs are built on real profitable industries, not Green token gestures that cannot survive without the lifeblood of subsidy, the very subsidies that kill off real jobs and push families into energy poverty.

At the heart of the problem is a deficit of more than 26 billion euros in Spain’s energy market, built up by subsidies to cover the gap between the cost of producing electricity and the price charged to consumers.

“We are still singling out renewable energies as the main guilty parties for this deficit,” Otto complained.

Dreadful, unethical even to correctly identify the source of problem, especially when it is Green which of course means it was done with best of intentions, and in the Liberal mind the panacea for collateral damage is 10cc of Good Intentions vaccine, and move swiftly onwards.

The state aid boosted the appetite of investors and led to a “boom” in wind and, later, solar energies, making Spain a world leader in the industry, Suarez said.

“Not only have the subsidies come down but new projects have been explicitly banned, which is pretty unusual,” he said.

Being the world leader in producing something like chocolate fireguards is probably not something to be real happy about, they look might look good, but they don’t work that well when the fire is lit, much like wind turbines don’t work when the wind is at the wrong speed or in cold spells the turbines free solid for weeks at a time. Just about any totally economically nonviable industry can be kept afloat if taxpayers are forced to throw enough money at it, but once the money runs out the mirage industry will collapse.

The consequences are far reaching.

Spain’s banks are hardly in a state to withstand the blow; they have already had to take more than 41 billion euros from a European credit line to recapitalise balance sheets laden with bad loans since a 2008 property market crash.

The evidence is there for all to see in many countries, not just Spain, of the consequences of Greening an economy, yet there are still those like Britain’s Climate Change Fool Ed Davey and the EU’s very own unelected Climate Commissar Connie Hedegaard who are still pushing the Green lie of renewable energy and lasting Green jobs.

A report by the US House of Representatives in September 2011 on Green jobs in many countries around concluded that: “there was no such thing as lasting Green jobs“, naturally ignored by the likes of Davey and Hedegaard, the Green economic meltdown in Spain will also be ignored.