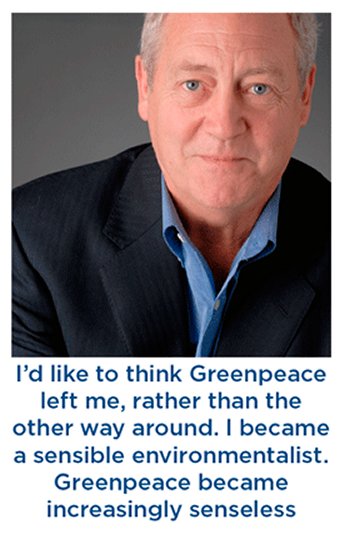 Dr Patrick Moore was one of the co-founders of Green NGO, Greenpeace, for several years Moore was chairman of Greenpeace in Canada, until he became concerned at the political direction Greenpeace was taking, and left the NGO.

Moore is far from popular with his former NGO and other Greens, in January 2012 he spoke about the Green folly of wind power describing it as “a destroyer of wealth and negative to the economy.”

Then in July 2012 Moore caused more Green outrage and upset when he attacked the warming alarmists for their attempts to cover up the lack of warming for what was then 15 years.  “These people are either completely naive about the relationship between CO2 and plants or they are making this up as a way of  deflecting attention from the lack of warming for the past 15 years”, said Moore.

In August that year Moore gave an interview to the Washington Times:

Ideology is negative in so far as it tends to divide people into warring camps with no possible resolution. My late Greenpeace friend Bob Hunter suggested early on that in order for environmentalism to become a mass movement, it would have to be based on ideology, or as he called it “popular mythology,” because “not everybody can be a Ph.D. ecologist.”

On February 25th 2014 Moore appeared before the U.S. Senate Environment and Public Works Committee, his former NGO really will not like what he had to say:

In 1971, as a PhD student in ecology I joined an activist group in a church basement in Vancouver Canada and sailed on a small boat across the Pacific to protest US Hydrogen bomb testing in Alaska. We became Greenpeace.

After 15 years in the top committee I had to leave as Greenpeace took a sharp turn to the political left, and began to adopt policies that I could not accept from my scientific perspective. Climate change was not an issue when I abandoned Greenpeace, but it certainly is now.

There is no scientific proof that human emissions of carbon dioxide (CO2) are the dominant cause of the minor warming of the Earth’s atmosphere over the past 100 years. If there were such a proof it would be written down for all to see. No actual proof, as it is understood in science, exists.

Moore then commented on the UN IPCC and their recent AR5 report which has been hailed by warming alarmists as further proof of the extreme likelihood that man has caused global warming:

The Intergovernmental Panel on Climate Change (IPCC) states: “It is extremely likely that human influence has been the dominant cause of the observed warming since the mid-20th century.” (My emphasis)

“Extremely likely” is not a scientific term but rather a judgment, as in a court of law. The IPCC defines “extremely likely” as a “95-100% probability”. But upon further examination it is clear that these numbers are not the result of any mathematical calculation or statistical analysis. They have been “invented” as a construct within the IPCC report to express “expert judgment”, as determined by the IPCC contributors.

Extremely likely is not a scientific term, that is going to cause upset at the UK Guardian and their 97% consensus propaganda stream where Dana Nuccitelli bases every post on the IPCC’s extremely likely meme.  In reality it will not cause any upset, because in true Green fashion no mention will ever be made of Dr Moore’s testimony to the US Senate.

These judgments are based, almost entirely, on the results of sophisticated computer models designed to predict the future of global climate. As noted by many observers, including Dr. Freeman Dyson of the Princeton Institute for Advanced Studies, a computer model is not a crystal ball. We may think it sophisticated, but we cannot predict the future with a computer model any more than we can make predictions with crystal balls, throwing bones, or by appealing to the Gods.

Computer models are not crystal balls, especially the ones used by the IPCC, these models are incapable of recreating any known events like the Middle Age Warming Period, the Little Ice Age and to date all the predictions of increased planetary temperature have been far higher than those shown by observed empirical evidence.

The computer models are nothing more than modern day versions of the Oracle at Delphi which was said to be infallible by the true believers of Greek times.

Perhaps the simplest way to expose the fallacy of “extreme certainty” is to look at the historical record. With the historical record, we do have some degree of certainty compared to predictions of the future. When modern life evolved over 500 million years ago, CO2 was more than 10 times higher than today, yet life flourished at this time. Then an Ice Age occurred 450 million years ago when CO2 was 10 times higher than today.

There is some correlation, but little evidence, to support a direct causal relationship between CO2 and global temperature through the millennia. The fact that we had both higher temperatures and an ice age at a time when CO2 emissions were 10 times higher than they are today fundamentally contradicts the certainty that human-caused CO2 emissions are the main cause of global warming.

Higher temperatures and an ice age when CO2 emissions were around 4000 ppm, today atmospheric CO2 is 395 ppm, now that is an inconvenient truth for warming alarmist central and not something that you can hockey stick out of the way like the Middle Age Warming Period.