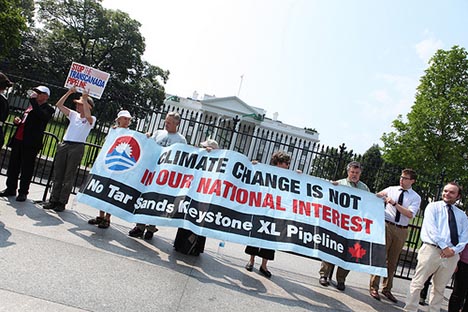 While Obama dithers on approving the Keystone XL pipeline Big Green has produced a new report claiming that the pipeline’s carbon emissions could four times more than previously thought.

The secret of waging any campaign successfully is to know which battles to fight and which ones to avoid, so the Green obsession with the Keystone XL pipeline is puzzling, given that it is a fight they have already lost.

The story goes like this, Canada has oil rich sands in Alberta, the plan is to build a 1700 mile underground pipeline from Alberta to oil refineries in Texas and Oklahoma, the pipeline is known as Keystone XL.

Green opposition to Keystone XL has been relentless, in February 2013 the so called “Biggest Climate Rally in History” against the pipeline saw champagne environmentalist Daryl Hannah get arrested, a fate shared at a previous anti pipeline protest by James Hansen, former head of the NASA Goddard Institute for Space Studies.

The Greens believe that stopping the pipeline will ensure that, what they describe as the most toxic fossil fuel in the world will not be extracted:

But scientists from the Stockholm Environment Institute say this analysis did not take into account its effect on global markets.

Keystone would carry around 830000 barrels of oil a day, this according to the reports authors Peter Erickson and Michael Lazarus could lead to international oil prices falling and demand to rise slightly.

The keyword here of course is could, but could is really a synonym for will in warming alarmist world so the report has been grabbed and is being broadcast as another reason to say no to Keystone XL.

The new findings are significant, given President Barack Obama’s pledge to only proceed provided it does not “significantly exacerbate” carbon pollution.

Findings? What findings? The report states could, ergo it is conjecture, there are no findings only a biased Green supposition.

So if Obama says no to Keystone will Canada end up with oceans of crude oil that they cannot ship anywhere and will the oil stay in the ground where the Greens say it should?

The answer is a resounding No, Alberta crude is already being shipped to the USA.

But even if President Obama rejects the pipeline, it might not matter much. Oil companies are already building rail terminals to deliver oil from western Canada to the United States, and even to Asia.

Since July, plans have been announced for three large loading terminals in western Canada with the combined capacity of 350,000 barrels a day — equivalent to roughly 40 percent of the capacity of the proposed Keystone XL pipeline that is designed to bring oil from western Alberta to refineries along the Gulf Coast.

Fed up with the delays by Obama to approve the pipeline Canada is already planning to increase the number of loading terminals:

Over all, Canada is poised to quadruple its rail-loading capacity over the next few years to as much as 900,000 barrels a day, up from 180,000 today.

The planned rail capacity is actually 40000 more barrels a day by rail, than by the pipeline, which again illustrates the futility of the opposition to the pipeline.

Additional oil is also being shipped by sea as well, both rail and sea transportation of oil are far more risky than a pipeline in the terms of potential environmental impact, a fact that seems to be lost on the self appointed Green guardians of the planet.