The ages old trick of tell a big enough lie, tell the lie often enough and people will believe it,  is being done to death on social media by Big Green and the warming alarmist machine in the run up to COP21 in December 2015.

COP21 is going to be held in Paris and according to the Green narrative the world is going to sign a legally binding deal to cut emissions and we will all live happily ever after in a world with a climate of our own choosing.

Every old Green scare story from drowning polar bears to ice free poles by (insert a year far enough into the future so it irrelevant) is being dragged out, dusted off, given a new coat of Green turd polish and broadcast as the truth.

Running in tandem with the Green lie machine is the Green wish projection and straw grabbing machine, looking to find anything that shows there is still some political support somewhere, in the world for their junk science and political agenda.

Take for example the election of India’s new Prime Minister Narendra Modi in May 2014: END_OF_DOCUMENT_TOKEN_TO_BE_REPLACED

According to a new report by Professor Benjamin Sovacool of Denmark’s Aarhus University unless the word moves to all wind solar there will be global drought by 2040.

The continued disintegration of the Climate Weirding industry is picking up speed as another corner stone of the scam, scientific consensus shatters.

A new survey of over 1000 earth scientists shows that only 36%, agreed with the UN Intergovernmental Panel on Climate Change (IPCC) that humans are main the cause of the non existent global warming.

The warming alarmist response was the usual scream of outrage and then tenuous reasons were offered as to why the earth scientists were not representative of science at all. It cannot be long until roaming squads of Green Feldgendarmerie are hanging traitorous scientists from lamp posts, until all that is left are the 76 scientists that form the mythical 97% consensus.

Running hand in hand with the vicious and vitriolic of course is the patently ludicrous, is this case, a report about fossil fueled electricity generation causing the world to run out of water by 2040.

The author fails the Green test of impartiality, but why worry about double standards when your noble cause is saving the world, the end justifies the means as the saying goes. END_OF_DOCUMENT_TOKEN_TO_BE_REPLACED

The year is 2007 and the whole world is in the grip of global warming fear, the Anthropogenic Global Warming boondoggle has almost reached its high water mark and every slimy, self serving politician across the globe is scrambling to be Green.

What is perceived to be vote winning Green tokenism runs amok, so much so that in the UK opposition leader David Cameron has a small wind turbine installed on the side of his house so the whole world can be assured of his Green credentials. This was short lived display of Dave’s Green credentials as the builders put the turbine in the wrong place and breached the planning consent as Cameron’s home is in a conservation area, it is difficult not to laugh when a stunt blows up in a politicians face.

The problem faced by all those politicians that were conned by the junk science of the warming alarmists is how to distance themselves from something voters across the western world no longer buy in to, or even worry about anymore.

No politician is ever going to hold up their hand and say “I was wrong“, instead Green issues are quietly dropped from the Agenda and the heretical voices of the non believers in Climate Religion start to be heard.

In a major Cabinet reshuffle in preparation for the forthcoming General Election, Cameron has quietly culled the believers in Climate Religion from the Government, and as to be expected the UK Guardian is outraged: END_OF_DOCUMENT_TOKEN_TO_BE_REPLACED

Polar Vortex was cause of the bitter winter of 1812 which hindered Napoleon’s long retreat from Russia. Now 200 years later Napoleon’s successors, the EU are in full retreat on their Climate Policy.

The 20th century successors to the failed dictator Napoleon Bonaparte, the EU are having their retreat from Moscow moment, as EU Climate Policy comes apart, quite literally at the seams.

The Climate Commissar Connie Hedegaard, Greens, Liberals and other beneficiaries of the warming alarmist industry are pushing hard for binding targets for renewable energy for 2030, while on the other side of the argument countries, industry and politicians are against binding targets.

Just before the UNFCCC COP19 climate circus in Warsaw last year, Hedegaard sort of admitted that the EU Climate Policy was not supported by all member states and that some countries are no longer taking part, for example the Czech Republic and Poland, the COP19 hosts. Poland is currently involved in a legal standoff with the EU, which if the EU lost would totally destroy EU Climate Policy in a single stroke. END_OF_DOCUMENT_TOKEN_TO_BE_REPLACED

UK Guardian finally admits the truth about bird choppers, but with an ulterior motive.

The UK Guardian has always pushed the Green meme about wind power being the cheapest form of energy in the long run, and what is more important it will allow Britain to meet the now conveniently forgotten carbon targets that once dominated the political landscape.

Us nasty climate change deniers have always maintained that wind power was no more than a heavily publicly subsidised monument to Green folly that provides very expensive intermittent energy supplies, creates no lasting real jobs and the production of wind turbines has created environmental catastrophes in countries like China.

With it being the Guardian a fair number of those that comment are outraged, in the way only a liberal mindset can be by the sheer heresy of the article and even more so that there is no mention anywhere of Climate Change, Global Warming or loss and damage. END_OF_DOCUMENT_TOKEN_TO_BE_REPLACED

If this were April 1st you would be forgiven for thinking this an April fool story, well to be frank it is a fool story, but more of a Green fool story than anything else.

The greatest Green minds of a generation have been snorting way too much Pixie dust, again, and with their rose tinted safety goggles on, have come up with probably their most stupid idea yet, flying wind turbines.

The plan is to have flocks(??) of wind turbines flying over a mile high above the ground, connected to a ground station via a cable, what could possibly go wrong, or even right come to that?: END_OF_DOCUMENT_TOKEN_TO_BE_REPLACED

Britain’s Climate Change fool is at it again, this time Ed Davey is telling the country that wind and solar will keep the lights on when 20% of Britain’s power stations close by the end of the decade.

Writing in Liberal Democrat Voice Davey then drags out the well worn Green jobs lie, Green jobs have not happened anywhere in the world thus far, but don’t worry because Britain will buck the trend and millions of lasting Green jobs will be created because a Green ideologue says so.

Naturally consumers will be better off as well, as Davey predicts that 30% of Britain’s energy mix will be funded by taxpayers in the form of Green subsidies for wind, solar and all the other economically non viable renewable energy schemes that Big Green see as the future. END_OF_DOCUMENT_TOKEN_TO_BE_REPLACED

OK I will admit that it is really difficult to type when you are laughing so hard, and let’s be honest there is one hell of a lot to laugh about here.

A Green profiteer and lobbyist whose appointment to the Energy and Climate Change Committee was a gigantic conflict of interest in the first place, was so confident and arrogant in his being Green, that he fell foul of one of the oldest tricks in the book, he was caught on tape by journalists in a sting, bragging about how  he was the Great I Am.

This is the same Green profiteer and lobbyist who tabled an amendment to the recent Energy Bill to totally decarbonise Britain’s electricity generation by 2030, an amendment that had it been passed would as they say, have been a nice little earner for Yeo and his Green cronies, all paid for by more jobs lost and more families pushed into energy poverty by ever rising electricity bills. 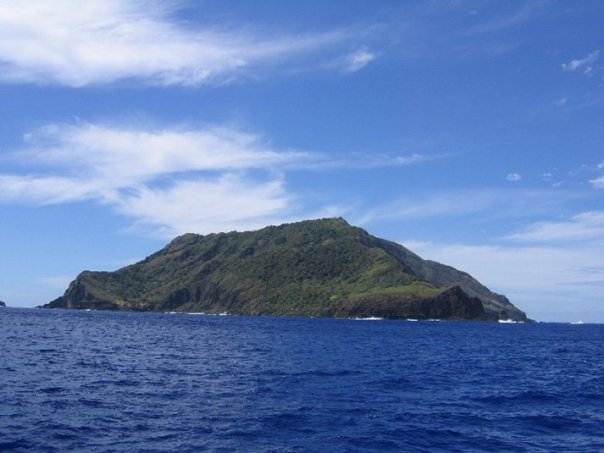 This is a classic case of government wasting tax payers money in an irresponsible way, all in the name of the International Aid Budget which currently stands at 0.7% of Britain’s GDP, and being Green.

Pitcairn Island is where the crew of HMAV Bounty settled, after casting the Captain of the Bounty, William Bligh adrift, the story has been immortalized in several Hollywood movies over the years so most people have some knowledge of the story.

The mutineers led by Fletcher Christian consisted of 8 British sailors, 6 Tahitian men, 11 Tahitian women, and 1 baby landed on Pitcairn in 1798 and remained there undiscovered until the US sealing ship Topaz visited the island in 1808. The people who landed in 1798 are the ancestors of today’s Pitcairn Islanders.

History is not sure what fate held became of  Fletcher Christian, he is alleged to have been brutally murdered on the island, other stories say that Christian made it back to England, though the logistics of doing this were nearly impossible at the time, for example today to travel to Pitcairn Island means flying to New Zealand, then taking 2 more flights and finally a 32 hour boat trip to reach the island, this place really does put the R in remote.

Pitcairn Island is a British Overseas Territory, a throw back to the days of the Empire, which means it receives priority foreign aid from the Foreign Aid budget, which is currently £43000 per islander. Estimates of the island population vary from 44 to 67, with 55 being the most popular, which is where the figure of £43000 comes from, considerably more than the average wage of £25000 in Britain.

On top of all the foreign aid money flowing in, the geniuses at the Department for International Development (DfID) decided that it was time for Green energy on Pitcairn Island and that a wind farm should be built: END_OF_DOCUMENT_TOKEN_TO_BE_REPLACED

The Cost Of Green Energy Topples The Government In Bulgaria 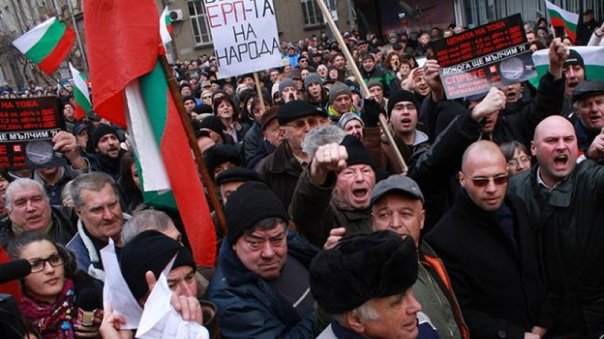 The citizens of Europe’s poorest country, Bulgaria, take to the streets to protest the cost of Green Energy and Poverty

There is a lesson to learned from events last month in Europe’s poorest country, Bulgaria, well actually there are 2 lessons to be learned, both unfortunately need to be learned by politicians in the rest of Europe, or the world when it comes to it.

The first lesson is that people will not put up with ever increasing electricity bills in the name of saving the planet while a few fat cats and crony capitalists cream off huge profits from Green subsidies on ordinary people’s and businesses energy bills, the second lesson is that Green intermittent renewable energy wreaks havoc on electrical grids, ultimately leading to brown outs and black outs as the grid cannot cope with the sudden Green energy spikes.

History shows that even a short period of rolling black outs will bring down a Government, even in a country like Britain, when in 1974 then Prime Minister Edward Heath took on the miners, with the resulting Three Day Week of rolling power cuts. Heath called an election in February 1974 when the Three Day Week was at its height, and effectively lost the election as he could not form a working majority for Government.

On February 20th this year protests at the cost of Green energy and the resulting increased poverty toppled the government of Boyko Borissov: END_OF_DOCUMENT_TOKEN_TO_BE_REPLACED