As Britain struggles under the weight of debt from the profligate spending of the worst Chancellor of the Exchequer and the worst Prime Minister in 300 years Gordon Brown, a new book says that Brown has been stewing in a pot of righteous indignation garnished with delusional thoughts of him saving the world, again.

Brown slithered out from underneath his rock in August to launch a diatribe of lies against News International and to let everyone know that he, Gordon Brown was right about everything and everyone else was wrong.

Now a new book Brown at Number 10 by Anthony Seldon and Guy Lodge reveals more about the most damaged personality to become PM since the end of World War 2: END_OF_DOCUMENT_TOKEN_TO_BE_REPLACED

So the orange war criminal is going to give the profits of his book to the British Legion, on the face of it a generous and altruistic gesture but as it with all things from the über spinmeister, nothing of course is what it appears to be.

The grandmaster of smoke and mirrors is at it again. END_OF_DOCUMENT_TOKEN_TO_BE_REPLACED

Blair takes a breather from having his nose up Bushs butt

It seems like a different life time ago that Gordon Brown lied to the Chilcot Inquiry.

Largely forgotten about with General Elections and Coalition Governments The Iraq Inquiry has rumbled inexorably along, but it only takes the name of former Labour Party Leader and War Criminal Tony Blair to bring the inquiry back into the headlines. END_OF_DOCUMENT_TOKEN_TO_BE_REPLACED

One of the most sickening aspects of Gordon Brown’s Labour regime was the shameful treatment of our armed forces and the breaking of the military covenant.

Brown and the rest of his politburo under funded the armed forces, cut defence spending in real terms for 4 years and used a an orchestrated campaign of lies and smears to tarnish anyone who dared speak out about the lack of funding. No one was immune to the campaign of smears and lies, General Officers, commanding officers and the families of serving officers were all the target of hate campaigns run by “Bolloks Bob” Ainsworth and his semi-literate side sidekick Bill Bramell.

A new low even for any Labour government and lets face it there have been some monumental Labour failures when dealing with our armed forces, all the way from the Wilson government failing the Argyll and Sutherland Highlanders in Crater to present day Afghanistan. Labour like all good apologetic socialists has always been more concerned with caring for the enemy, at the expense of our own soldiers lives and well being. END_OF_DOCUMENT_TOKEN_TO_BE_REPLACED

Gordon Brown and Labour’s record with our armed forces has been nothing short of disgusting.

At Chilcot Brown lied about defence spending, Labour Ministers have conducted smears and lies campaigns against serving General Officers and members of the their families, repeated Freedom Of Information requests have been filed about expense claims for officers by some of the worst Labour troughers in the MPs Expenses scandal.

Then there was shameful case of the Gurkhas and the campaign by Joanna Lumley that caused a U turn by Gordon Brown and much seething resentment and a desire for payback against Joanna Lumley.

The actress hit back at Defence Minister Kevan Jones, who accused her of “deathly silence” over allegations UK-bound Gurkhas were being forced to pay hundreds of pounds in legal advice in Nepal.

Mr Jones apologised to Ms Lumley’s in a statement saying:

“I am sorry if any offence was caused – this was not intended.” END_OF_DOCUMENT_TOKEN_TO_BE_REPLACED

The infallible one’s mistake at the Iraqi inquiry has done serious damage to Gordon Brown with voters if tonight’s BBC 1 Question Time is anything to go by.

The second audience question was about the infamous “defence spending rose in real terms every year” mantra.

Labour sent Margaret Beckett out as the sacrificial lamb, and Beckett must have guessed that she was in for a rough ride. The real stars of this part of Question Time were the audience and David Starkey, with Margaret Beckett playing the fall guy.

Beckett’s responses to the question about the “mistake” were greeted with heckling and jeers, when she said “Do you think that Gordon Brown would be so stupid as to lie?”

David Starkey replied “Yes, because he thought no one would notice” END_OF_DOCUMENT_TOKEN_TO_BE_REPLACED 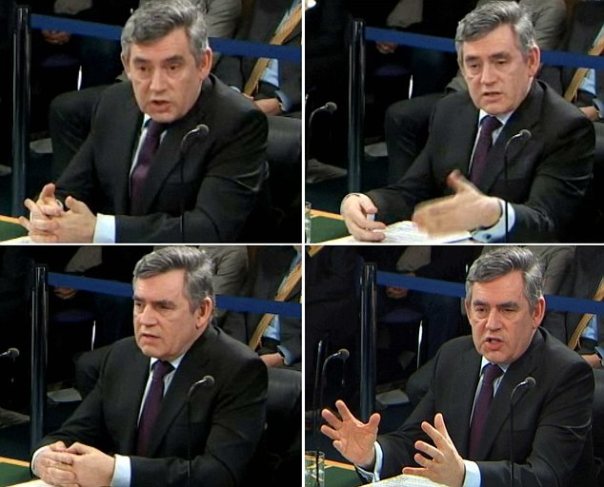 Gordon Brown at the Chilcot Inquiry

Gordon Brown has a written a 3 page letter to the Chilcot Inquiry explaining that new facts have come to light and that the evidence he gave was wrong, there is no apology for the errors which actually apply to 25% of the time Labour has been in office.

How many times have Brown and his supporters repeated that for every year since Labour came to power “defence spending has increased in real terms”?

There have been many stories about Brown cutting helicopter budgets and repeatedly denying life saving equipment for our troops. All have been denied by the Labour propaganda machine.

At PMQs on Wednesday Gordon Brown did a humiliating climb down and admitted he the information he gave the Iraq Inquiry was wrong, strangely enough at last week’s PMQs the information was still correct.

The statement about “defence spending rising every year in real terms” was described a disingenuous by some, Aardvark prefers the phrase “a calculated lie”. END_OF_DOCUMENT_TOKEN_TO_BE_REPLACED 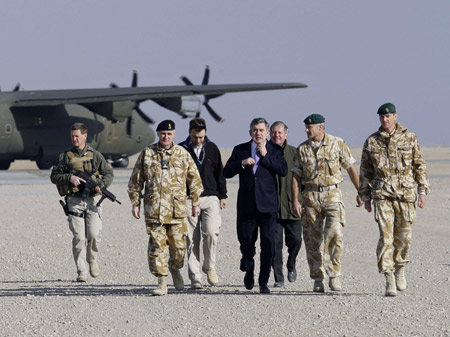 How does Brown have the nerve to go Afghanistan?

The issue of Gordon Brown and funding for the UK Armed forces is back in the spotlight again today, with Brown denying at PMQ’s that he had denied funds to the forces with the unconvincing “Military spending rose every year” and will “increase in the next financial year”.

More lies, spin and deceit, unless the Military spending rose to meet the immediate need, which we know it did not, then Brown is once again being disengenous and it could be reasonbly argued has blood on his hands.

The leaked letters show Brown personally overturned earlier Treasury assurances that the Ministry of Defence would be free to spend extra cash on troop-carrying helicopters for Iraq and Afghanistan.

In one letter sent in 2004, Hoon warned that, if Brown refused to back down, “We would have to scale back on major equipment programmes.” He went on to claim that the helicopter programme in particular would suffer.

In addition to Hoon at Chilcot, there were also leaked letters from the MOD END_OF_DOCUMENT_TOKEN_TO_BE_REPLACED

Aardvark’s faith in the natural balance and the order of things was restored in part, by the leaking of the Climategate files. The timing was superb and finally someone with morals and principals who could no longer stomach the lies and hidden agenda of Michael Mann, Phil Jones and the IPCC acted. The Church of Climatology and the ManBearPig believers will say that the CRU server was hacked, the specific content of what was leaked calls the hacking theory into question, unless the hacker was able to spend hours in the CRU network this is unlikely.

The latest leak to do damage to a prolonged and orchestrated lie concerns Gordon Brown; Brown’s whole political reputation has been built on and by lies, deceit, smears and bullying.

All through 2009 arguments raged as stories of equipment shortages especially helicopters, made the headlines. Brown, the Cabinet and Labour supporters all denied the shortage of equipment, launched into a campaign of smears and lies against General Officers and in one instance a family member. The smears and lies got so bad that Bob Ainsworth issued an order to his ministers to stop smearing General Officers.

Just like Climategate and MP’s expenses another person has had enough of the lies and leaked letters where Gordon Brown, as Chancellor repeatedly prevented then defence minister Geoff Hoon from ordering equipment that would have saved lives on the battlefields of Iraq and Afghanistan.

The leaked letters show Brown personally overturned earlier Treasury assurances that the Ministry of Defence would be free to spend extra cash on troop-carrying helicopters for Iraq and Afghanistan.

In one letter sent in 2004, Hoon warned that, if Brown refused to back down, “We would have to scale back on major equipment programmes.” He went on to claim that the helicopter programme in particular would suffer.

The leaked letters show how Brown’s actions during the crucial period of 2002 to 2004 meant that military chiefs were unable to buy new helicopters which could now be in service in Afghanistan.

The lack of air support has forced British troops to take dangerous journeys by road, exposing them to deadly Taliban bombs.

Military chiefs have long complained that the Treasury under Brown starved them of resources. Only now, however, can Brown’s personal involvement in the battles with the MoD be disclosed.

Once again Gordon Brown and Labour have lied and sold our Armed Forces short, there is a General Election coming up and if you care for the lives of our service people then voting Labour is not really an option.

Another typical example of the multicultural stupidity that Blair, Brown and Labour have forced on this country.

A treasonous Islamic militant is paid more on benefits that our soldiers earn for fighting scum like Anjem Choudary, yet another event where Gordon Brown and Labour have failed our Armed Forces.

Hat tip to Guido for the chart.