Regular readers of this blog can probably imagine Aardvark dancing for joy, a fairly horrendous visual to be sure, but there is indeed deep joy at Aardvark Towers because it is looking increasingly likely that Chris Huhne will shortly be gone from political life.

The leader of the Church of Climatology in Britain, has been interviewed again by Essex Police and a file prepared for the Crown Prosecution Service (CPS).

The CPS will be considering charges of Perverting the Course of Justice against Huhne and his estranged wife Vicky Price: END_OF_DOCUMENT_TOKEN_TO_BE_REPLACED

The Chris Huhne speeding points saga had gone almost comatose, in a recent article in the Telegraph about Huhne the point of the story was that Huhne would escape any action because police only keep speed camera photographs for 5 years and the allegations against Huhne date back to 2003.

Now in a new twist in the story Essex Police raided the home of Huhne’s ex-wife, at 7am on July 2nd, where they seized the mobile phone belonging to the couple’s 18 year old son; the phone is said to contain a text exchange between Huhne and his son, where they discuss the case.

Details of Huhne’s previous interview with police are starting to surface, where it appears Huhne’s definition of actively helping police is his right to silence.

Nick Clegg has thus far supported Huhne, but the latest word is that Clegg is tired of the never ending stories about Huhne END_OF_DOCUMENT_TOKEN_TO_BE_REPLACED

Chris Huhne – How Much Longer 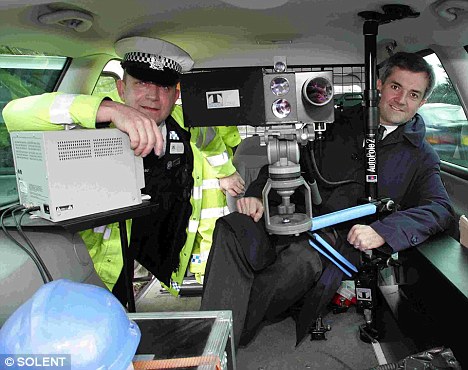 Huhne and a mobile revenue device in 2005

Chris Huhne can be easily located these days, just look for the increasing hordes of circling vultures in the sky and not far below will be the warming alarmist himself.

At the launch of whatever Climate Scripture Attila the Huhnatic did yesterday, the absence of Cabinet ministers not wishing to pick up the smell of death was quite simply amazing, given that a colleague is fighting for his political life, cabinet ministers were conspicuous by their absence and of the 2 who turned up, they were gone in under 10 minutes.

The political death of Chris Huhne is imminent, while he has the “full confidence” of duplicitous munchkin Nick Clegg, David Cameron has distanced himself from Attila the Huhnatic by saying “As for Chris Huhne, he has denied the allegations.” Attila the Huhnatic has been left hanging in the breeze since Cameron’s official spokesman refused to repeat that Huhne had Cameron’s backing.

The “full support” politically of someone who you personally attacked and attempted to dethrone, or Dave distancing himself from Huhne, it is difficult to work out which is more damaging to the beleaguered Climate Change Secretary; amusing to see how far the mighty Huhne has fallen since May 6th with his wind powered leadership bid, the great man proved as useful and as efficient and his beloved wind turbines. END_OF_DOCUMENT_TOKEN_TO_BE_REPLACED

Chris Huhne is as much a danger to Britain as Gordon Brown and Ed Miliband were at the height of power for the warming alarmists, in October 2009.

It is still business as usual for Chris Huhne, Al Gore has given up, even George Moonbat at the Guardian has given up the fight for AGW so what makes Chris Huhne continue almost single handedly a fight that has no real public support, and is a net vote loser? END_OF_DOCUMENT_TOKEN_TO_BE_REPLACED

Church Of Climatology: Chris Huhne And The Wind God

How many people who campaigned actively for a Conservative victory in May expected to have one of Dave’s Religious Lib Dem sock puppets as Energy Sectretary?

The answer is probably zero, as in the words of the Monty Python election special “Not a sausage, bugger all”

While the outcome was not expected, the reality is all too true, Chris Huhne is a fully paid up member of the Church of Climatology and every bit as dangerous to this country with his dogmatic and stupid energy plans, as was the outgoing Climate Change twat little Eddy Miliband. END_OF_DOCUMENT_TOKEN_TO_BE_REPLACED