Baroness Scotland – I Want A Jaguar

The leading member of the Labour Political Elite, employer of illegal workers, breaker of own laws and person most protected by Labour Baroness Scotland wants a Jaguar.

A big cat to keep the illegal workers under control and prevent them getting nasty Max Clifford involved? 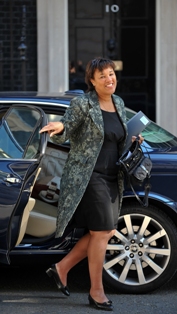 No, one of the finest luxury cars in the world made in Britain.

Chauffeur driven Jaguars are normally reserved for senior government ministers, not the Attorney General, who rates a Toyota Prius.

Labour has harped on about low carbon emission vehicles and ministers of the Attorney Generals rank are only allowed a car that emits 130gm/km or less, not the 209gm/km of the Jaguar.

Once again Labour’s political elite are saying “Dont do as I do, do as I say”

The Baroness, The Illegal Worker and The Prime Mentalist

This a story that sounds like it should become a classic of British Literature, and given time it will probably be taught to future generations as the time when British Politics and Government sunk to the levels of Zimbabwe, while using a script provided by Quentin Tarantino.

This government led by Gordon Brown has no standards of moral integrity, honour or responsibility. Labour under Tony Blair, did away with wrong doers at the speed of the light; Blair had political awareness, but not integrity.

Like her cleaner, it’s time for the Baroness to go comments The Mail on Sunday

So where is the Prime Mentalist?
As usual when the fan and the effluent get together, Brown can be found hiding in his bunker waiting for the nasty things to go away.

Will Baroness Scotland resign or will Brown fire her?

Strangely enough integrity and honesty could be about to break out in the Labour Party, former party whip Graham Stringer has condemmed Brown’s total lack of leadership on the matter. With a particularly neat touch that amuses Ardvaark, Stringer goes on say “That Tony Blair would have handled this much better”. More from Glen Owen in The Mail