The BBC funded by a television tax, that if not paid can and does, result in people being sent to prison for non payment is supposed by law to be impartial in its news reporting.

The BBC’s coverage of the Environment and Climate Change has been repeatedly criticised as not only news and science have been corrupted,  but also entertainment where brain dead lightweights like Chris Evans likened AGW to “lighting a fire in your living room“.

Even in a second rate remake of Day of the Triffids man made climate change was the reason for the Triffids rise, the BBC has managed to get Climate Change in to just about everything it broadcasts.

In something worthy of the now defunct Eastern Bloc the BBC Trust investigated the BBC’s Religious Programming on Climate Change, and concluded that the coverage  is not biased enough in favour of the Green agenda, bearing in mind that the BBC is legally bound to be impartial,  and in the words of its own report it needs to discard impartiality. END_OF_DOCUMENT_TOKEN_TO_BE_REPLACED

David Attenborough on side at the BBC, a propaganda machine for climate-change zealots

The final episode of Frozen Planet, probably the finest Natural History documentary ever made was a sad occasion, sad because David Attenborough, the face of Natural History to millions of people ceased to be that, instead, losing all objectivity Attenborough produced a program that is in line with the BBC’s one sided view on Anthropogenic Global Warming.

The BBC have decided that no air time should be given to climate change sceptics, as in the words of a report commissioned for the BBC the evidence is overwhelming, this policy clashes head on with the BBC’s statutory duty for reporting to be impartial.

As the COP17 failure grinds slowly onwards the BBC has kept the output of warming alarmist propaganda programs going, a few nights ago on BBC4 the program Around the World in 60 minutes looked to be interesting. Shot from the International Space Station which orbits the planet every 90 minutes it promised some stunning footage, instead we were treated to the  usual bunch of warming alarmists preaching about CO2 emissions, Environmental Armageddon and the increasingly popular give all our money away diatribe.

The final episode of Frozen Planet was not a big seller in the international market, the Discovery Channel for example declined  to buy it, so did many other countries, as they thought the program was less than objective and would have no audience in their country: END_OF_DOCUMENT_TOKEN_TO_BE_REPLACED

Panorama – Is There A Climate Of Change At The BBC

There is a phrase appearing more and more frequently in papers and blogs: In the post man made global warming world, encouraging but as with all things it needs to be taken with a dose of cautious realism.

Last nights BBC1 Panorama program on rising energy costs was nothing like the usual fare of Church of Climatology propaganda broadcast relentlessly by the BBC, naturally there was no mention of the potential shale gas revolution for Britain, but equally there was no mention of Global Warming, Climate Change or whatever natural climate change is called by warming alarmists these days.

Armageddon In The Oceans – Just Another Green Propaganda Lie

Oceanic Armageddon according to 27 eco-warriors who spent 3 days telling each other scary fear stories and then published a report of their fears as scientific fact.

The Oceans and mankind are doomed if you believe the combined Green grey literature put out in synchronisation by Fiona Harvey at the Guardian, Richard Black at the BBC and Michael McCarthy at the Independent.

A less than transparent Green NGO called International Programme on the State of the Ocean (IPSO) has produced a report predicting a mass extinction of species comparable to the 5 that occurred in what IPSO call “pre-history”.

As usual the panel of experts found firm evidence that Global Warming was the cause of this: END_OF_DOCUMENT_TOKEN_TO_BE_REPLACED

The BBC4 program Meet The Sceptics was supposed to present the views of people who dont buy into the whole giant mutant star goat going to ravage the planet scenario, instead it was just another propaganda broadcast on behalf of the Church of Climatology.

Lets make this crystal clear before proceeding, the BBC is totally incapable of making any unbiased programs on Anthropogenic Global Warming because their pension fund is heavily invested in Green industries, which leads to an immediate conflict of interest, where the BBC employess are forced to choose between providing unbiased programming we are forced by law to pay for, or a comfortable retirement.

No prizes for guessing who the loser will be.

Meet the Sceptics was really de rigeur warming alarmist fear at it’s comical best, the carefully selected out of context comments from James Delingpole, so brief that if you laughed too long, you missed James END_OF_DOCUMENT_TOKEN_TO_BE_REPLACED

As a nation, I believe that on the whole, we British are a caring nation.

I also believe that the Government have a responsibility to the parents and carers of disabled people to provide these people with the support that is needed for them to have a happy and fulfilled life.

From time to time there is someone in the world of politics, media or warming alarmism that really makes a complete twat of themselves, not on a every day scale but total and utter twatishness on a Gordon Brown or 10:10 scale.

November is going to be a month of fierce competition for the Twat of the Month award, with the US mid term elections and the COP16 hooker fest in Cancun everyone from Nancy Pelosi, Chris Huhne to Al Gore could be in the frame.

But then a reasonably well known journalist used to living off the tax payer makes a play with a statement so Twatish that several twats have downgraded themselves to village idiot, so embarrassed are they.

Bonfire Of The Quangos 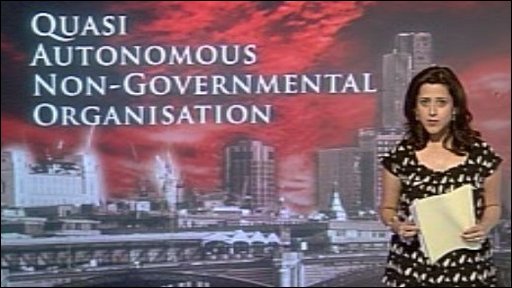 192 Quangos to be removed

The Quango (quasi-autonomous national government organisation) so beloved of Gordon Brown and Labour as yet another way to control and “nanny” our lives has had it’s day, 192 totally pointless Labour created Quangos are set for the scrap heap.

According to the Cabinet Office, 192 are to be scrapped entirely and 481 to be reformed. END_OF_DOCUMENT_TOKEN_TO_BE_REPLACED

The only way to stop the BBC promoting the great Global Warming Scam is to scrap the licence fee, and then see who wants to pay for the politically correct, socialist warming alarmist agenda that the BBC broadcast.

A BBC reporter Paul Hudson, had the Climategate emails weeks before they actually hit the blogosphere but sought to suppress them in order to protect the AGW lie, which the BBC then followed by some lack lustre reporting on Glaciergate in a further attempt to censor news that did not match the BBC’s political agenda.

In the last two weeks there has been no mention on the BBC of the 10:10 exploding children, the resignation of Professor Hal Lewis or how Democrats are distancing themselves from the Climate Religion policies of Obama.

If the BBC were your only source of news you would be forgiven for believing that Climate Change was real, not junk science END_OF_DOCUMENT_TOKEN_TO_BE_REPLACED

Warming Alarmists Had Their Chance And They Blew It

The Warming Alarmists had it all, Universities and Professors making up the data to support the man made Climate Change scam, the IPCC run by a railway engineer and producing reports that were no more than precis of WWF propaganda mailshots, the UN working hard to set itself up as a one world government and the conspiracy of left wing leaders like Barack “Settled Science” Obama, Gordon “50 Days to Save The World Brown, Hugo “Give Me All Your Money” Chavez and all the rest, either standing with hands out for our money or about to give our wealth away.

The vast majority of MSM outlets towed the party line and spouted the AGW lie, in Britain the BBC we are forced to pay for by the television tax prayed daily at the Church of Climatology, more due to the fact that some fool invested significant portions of the BBC pension fund in Green Industries, the old saying about fools and money soon being parted springs to mind. So to protect their pension fund the BBC spread verbatim the AGW lies of Gordon Brown and Ed Miliband, impartiality at the BBC went out of the window, trampled flat by personal gain.

No pressure group in history has ever had the advantages that the warming alarmists had So where did it all go wrong?