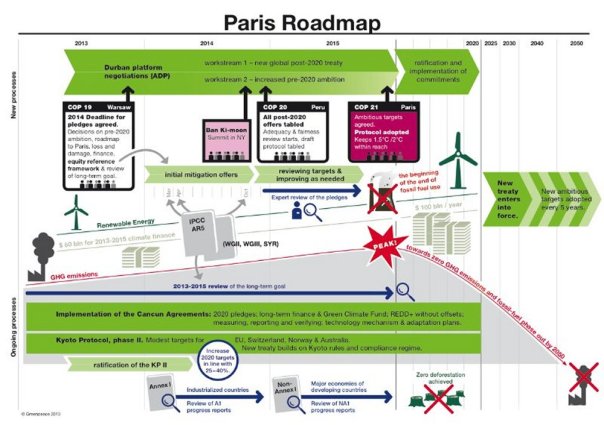 The road map to COP21, note the beginning of the end of fossil fuel use scheduled for 2016.

There was a departure last year at COP19 with the warming alarmist industry scaling down the expectations of exactly what COP19 would achieve, which was just well, because in addition to being the 5th successive UNFCCC COP meeting in a row to crash and burn, COP19 showed the cracks appearing in the Green agenda.

All the Green NGOs and other self proclaimed representatives of civil society, walked out of the meeting when the western world refused to pay trillions of dollars in so called “Climate Justice” money. The cake was then truly iced with an awesome bout of name calling between Venezuela and the EU Climate Commissar Connie Hedegaard, who blamed Hedegaard not only for the failure of COP19, but also COP15.

The spectre of COP15 haunts the warming alarmist pysche, the high water mark of Green ambition, it has all been downhill since 2009.

So ingrained into the Green collective memory is COP15, they now believe that politicians will not reach a meaningful deal because they are frightened of having another COP15 debacle at COP21. END_OF_DOCUMENT_TOKEN_TO_BE_REPLACED

The UNFCCC, Lima, Paris And The Road To Nowhere

The dust has settled on COP19, mega quantities of Green Turd polish have failed to disguise the fact that COP19 was yet another dismal failure for the UN Framework Convention on Climate Change (UNFCCC).

COP19 was most the divided COP meeting so far, with the Green NGOs and the other self appointed representatives of “Civil Society“ staging a walk out, followed soon afterwards by the Venezuelan vice minister Claudia Salerno accusing Connie Hedegaard of damaging not only COP19, but COP15 as well.

The reality of the collapse of the Global Warming Boondoggle has at last percolated through to the highest levels of the UNFCCC and according to the 3 past and present leaders of the UN wealth redistribution scheme the future is far from bright: END_OF_DOCUMENT_TOKEN_TO_BE_REPLACED