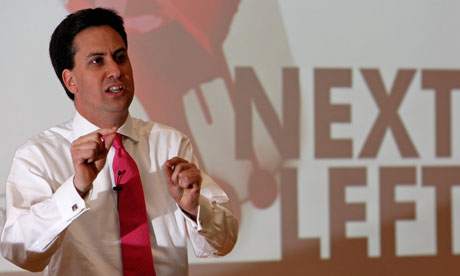 Ed Miliband not surprised by his poll lead

A Sunday Times poll has Ed Miliband as the man most likely to succeed Gordon Brown.

It’s my sense that party members are responding to my message.

“They’re making a judgement about who’s best to take on David Cameron and they’re turning to me.

END_OF_DOCUMENT_TOKEN_TO_BE_REPLACED

After much speculation little Eddie Milichump has thrown his hat into the ring and will be standing against big brother Davey Milichump.

Neither is a spectacularly inspiring candidate.

David Miliband who like everyone else in the Cabinet had the backbone of a mollusc when it came to unseating Gordon Brown, a man for whom terrorism is acceptable and whose most recent claim to fame is his ability to make a post menopausal Hilary Clinton moist.

Ed Miliband is the Climate Change nut, his department the DECC was rebuked over the fear based brainwashing on man made Climate Change. At Copenhagen Ed Miliband was fully supportive of the one world socialist government suggested by Ethiopia, beaten to his feet in rapture only by Gordon Brown and Nicolas Sarkozy.

As recently as the end of March Ed Miliband was desperately trying to get the whole AGW scam going again.

Will there be other contenders to the legacy of former Prime Minister Gordon Brown or will this be a Cain and Able contest of biblical proportions?

With all this General Election business the wealth redistributionists and one world governmentalists have had an easy ride of it lately.

Apart from Gordon Brown and Ed Miliband trying to restart the Climate Chage talks last month and Brown trying to push the AGW agenda in the last leader’s debate, Anthropogenic Global Warming has not really featured in the General Election thus far. Yesterday when Gordon Brown was supposed to be launching Labour’s Green manifesto, he instead used the occasion to attack Conservative policies.

What happened to 50 days to save the world?

Kevin Rudd two years ago thought no issue was more important, and he was the man to say so:

The biggest challenge the world faces in the decades ahead is climate change. It is the great moral and economic challenge of our time.

Today no issue is more embarrassing, and Rudd gets unidentified spokesman to say it’s on the backburner:

It was once a centrepiece of the Federal Government’s election strategy, but now the emissions trading scheme (ETS) has been relegated to the shelf until at least 2013. Hat tip to the always excellent Andrew Bolt

Kevin Rudd, like Gordon Brown and Obama were all people for whom the science was settled, there was no debate left they were going to push ahead with their dream of one world unelected socialist government.

Meanwhile back in the USA the Climate Change Bill has been postponed indefinitely: END_OF_DOCUMENT_TOKEN_TO_BE_REPLACED

Remember the much criticised Climate Change ad run by Ed Miliband and the DECC where a father read his daughter a nightmare bedtime story with drowning rabbits and the like?

This did not breach the Advertising Standards Authority’s guidelines, unlike the corruption of children’s nursery rhymes Jack and Jill and Rub a Dub Dub which were used to spread the fear message and wildly exaggerate the potential impact of Anthropogenic Global Warming on the British Isles.

Using the tried and tested “nothing to see here” approach that Pope Al Gore and liars like Michael Mann and Phil Jones trot out relentlessly, Miliband’s adverts ignored Climategate and the many flaws, lies and exaggerations of the 2007 IPCC report and continued with business as usual approach.

The two posters created on behalf of the Department of Energy and Climate Change juxtaposed adapted extracts from the nursery rhymes with prose warnings about the dangers of global warning.

One began: “Jack and Jill went up the hill to fetch a pail of water. There was none as extreme weather due to climate change had caused a drought.” Beneath was written: “Extreme weather conditions such as flooding, heat waves and storms will become more frequent and intense.” END_OF_DOCUMENT_TOKEN_TO_BE_REPLACED