Theresa May axes Harmans Socialism In One Clause

Harriet Harman’s Equality Act contained a clause that there was there to do nothing more than buy votes for Labour; the so called Socialism In Once Clause was supposed to divert more public to certain areas of the country deemed to be deprived by the Politburo.

Mrs May will warn that the measure could have meant public spending was “permanently” focused on deprived parts of the country.

END_OF_DOCUMENT_TOKEN_TO_BE_REPLACED

Bonfire Of The Witches Pelosi, Harman And Gillard

Just a few months ago these three uninspiring harpies were some of the most powerful women in the socialist world, and now thanks to the democratic process all three are in terminal decline.

Harriet Harman, depputy leader of the British Labtard party and convicted traffice menance booted from power in the General Election in May 2010.

In an amazing display of hypocrisy Harman turned on Phil Woolas for his election campaign, which used tried and tested Labour methods of electioneering. Harman misjudged the mood of the PLP badly and is now under attack for her treatment of Woolas. END_OF_DOCUMENT_TOKEN_TO_BE_REPLACED

The Books Labour Ministers Should Have Written 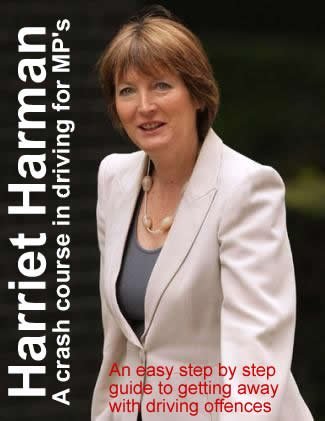 END_OF_DOCUMENT_TOKEN_TO_BE_REPLACED

America has it’s very own Harriet Harman, a particularly nasty, mean and repressive bitch that goes by the name of Nancy Pelosi, Pelosi is Speaker of the House in King Hussein’s regime for those that don’t follow US politics that closely.

Harman’s answer to everything was to ban it, regulate it, control it, nanny it and if that did not work resort to the profligate use of words that ended in “ist” or “ism”, those of us that dared question the uncontrolled immigration that was Labour’s hidden agenda were deafened by the screams of “Racism”.

The international Marxist movement, however it dresses itself up, be it as Barack Obama, New Labour, Kevin Rudd whatever is all about one thing, state control and suppression of any dissent to the party line. Now we think it was bad here, in the USA it’s just getting a lot worse END_OF_DOCUMENT_TOKEN_TO_BE_REPLACED

This story was in yesterday’s Telegraph and also on Conservative Home, at the BBC there is deathly silence.

It’s emerged that a very senior Shadow Cabinet member once said that sexually explicit photographs or films of children should be legalised – unless there was evidence that the child had been harmed.

And at the time (the late 1970s), the spokesman was a senior figure in a libertarian group that wanted the age of consent lowered to 14, and incest decriminalised.

Furthermore, paedophile organisations were affiliated to the group – which said that “childhood sexual experiences, willingly engaged in, with an adult result in no identifiable damage”.

The story did indeed break yesterday. (The Daily Telegraph had it.) But –

* The politician in question wasn’t a Shadow Cabinet Minister. It was no less senior a Cabinet Minister than Harriet Harman, Leader of the Commons and prospective Labour leadership candidate.
* The organisation wasn’t a libertarian group. It was that establishment body, the National Council for Civil Liberties.
* And although Tim Loughton, our Shadow Children’s Minister, judged our reaction to the story well, there was – guess what? – little BBC reaction, no sign of a right-wing media ring-round, no reaction from the conservative commentariat: no sense of a story gaining momentum. I can’t find anything significant on it in today’s media.

My point isn’t that Harriet Harman wants to ease the legal restraints on paedophile activity. (It should go without saying that she doesn’t.) Nor is it that her views during the late 1970s are worth the kind of media rampage that I sketch out above It’s simply this.

Another ghost come back to haunt Labour like Gordon Brown’s go go dancing as a job for women. 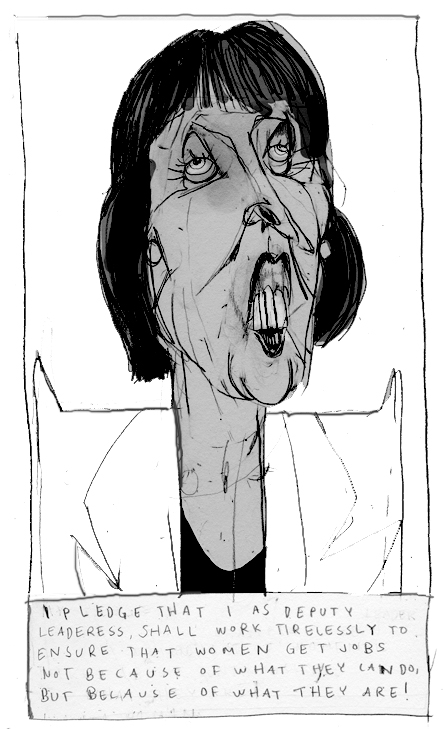 Deputy Labour Leader and repeatedly convicted traffic menace Harriet Harman has been caught out again, this time using tax payers money to fund her travel to a Labour Party rally in Exeter, seat of Ben Bradshaw, he of too many twits make a twat fame.

The real reason for Brown taking the Goats on the road, is really to try and rally Labour support in marginal constituences.

In a leaked letter from Ms Harman seen by The Times, she made plans to meet candidates, officials and trade unionists from across the South West region to discuss campaign strategy.

The letter, sent 12 days before the February 5 visit, said: “This will be a chance for me to hear directly from you as party members in a private meeting to talk about the issues and campaigning activity in the South West. It will be particularly helpful for me to hear from you in the run-up to the general election about the activities taking place in the area.”

Details of the meeting were not released to the press at the time.

Labour is vigorously defending the seat, held by Ben Bradshaw, the Culture Secretary, with a 8,559 majority over the Conservatives. Ed Balls used the same occasion to visit Plymouth, where Labour holds two seats. END_OF_DOCUMENT_TOKEN_TO_BE_REPLACED

Labour deputy leader and Leader of the Commons Harriet Harman has pleaded guilty to driving without due care and attention.

A second charge of driving while using a mobile phone was apparently withdrawn, Harman did not attend the hearing.

It must be wonderful to be above the law, by being  a member of the Labour Political Elite. 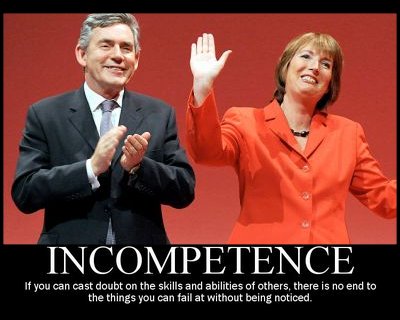 2009 has been Gordon Brown’s annus horribilis (yes there is probably a Mandelchump joke in there) the financial saviour of the world could not save his own country, as the financial predictions of Brown and Darling were proved not only wrong, but so wide of the mark as to be laughable.

The scandal of MP’s expenses exploded in to the news courtesy of the Telegraph, and continues to cause massive tidal waves with today’s news that the Met Police have sent 2 further files on MP’s to the Crown Prosecution Service, making a total of 6 MPs and Lords in the frame. The expenses scandal initially reflected badly on the Government and Gorbals Mick the speaker, then backfired on Gordon Brown as he has had to pay back more money he should not have claimed.

The things claimed have verged from the ridiculous to fraud for non-existent mortgages, there will doubtless be some sacrificial lambs next year to satisfy the blood lust of voters rightly incensed over the abuse of taxpayers money by people they trusted.

The rising number of casualties in Afghanistan, the shortage of helicopters, equipment and funding blew up and did Brown, Ainsworth and Labour no favours.

Gordon Brown’s inability to admit there will have to be cuts in spending, the infamous 10% Tory cuts smear when government departments were preparing 20% cuts, 50% income tax and the resumption of class war and politics of envy have all failed to resonate with the public.

Then there was the slow motion car crash of the Labour party conference, the Sun pulling the plug on Labour support and Mandelson redefining the meaning of “Chump”. END_OF_DOCUMENT_TOKEN_TO_BE_REPLACED

Harriet Harman Born To Be Wild

Aardvark will admit to being very pleased with news that Deputy Labour Leader Harriet Harman is to be charged with Careless Driving and Using A Hand Held Mobile phone while driving. For too long left to their own devices Labour has always closed ranks and protected their Political Elite.

This time they can’t whitewash their way out of this, due process will have to take it’s course.

More bad news for Harriet as the cursed one-eyed son of the Manse has announced is his support for her, the curse of Jonah Brown will now destroy Harriet. How strong this support is, is open to interpretation as a spokesman for the Prime Mentalist said Brown still “had confidence” in Harman.

If Harriet is found guilty then it might just sound the death knell of the Harpies’ political career,which would leave Labour in an ever worse mess for the General Election with a discredited Leader and a disgraced Deputy Leader.

Ms Harman has not exactly had the best of driving records:

April 2007 and Harman the speed queen is fined £60 for exceeding the speed limit in Suffolk, the 3 penalty points for that offence are still current on her licence.

The problems dont stop there: The penalty for using a handheld mobile phone while driving is currently a £60 fine (which may rise to £1,000 if the matter is dealt with in court) plus three penalty points. However, motorists caught driving dangerously while using a handheld phone may face a jail sentence under current Crown Prosecution Service guidelines. In addition, motorists involved in an accident while using a handheld device may find that their insurance cover is invalidated.

Harman protests her innocence, but given her driving record it’s hard to see how she can keep her licence if convicted, and given the way Labour protects its own that’s one big IF.