Al-Muhajiroun And Islam4UK Are Banned By UK Government 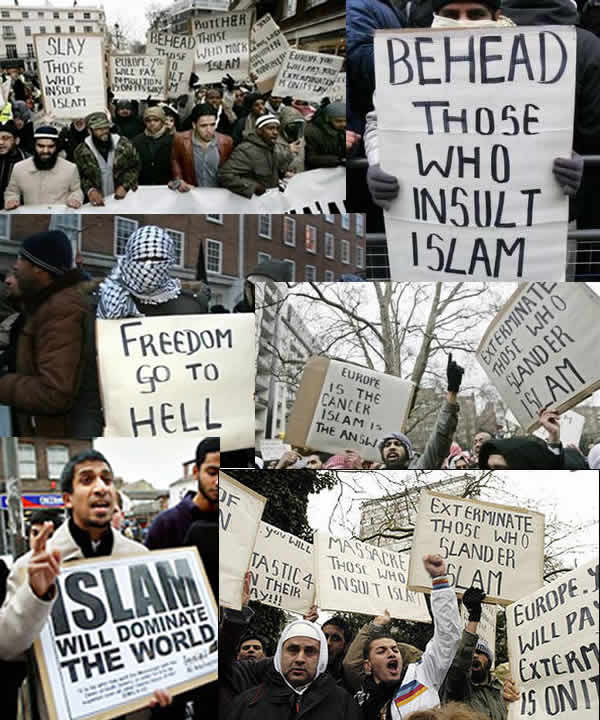 Anjem Choudary and Islam4UK shot into the headlines with their planned march on the town of Wotton Bassett.

The planned insult to our war dead and their families backfired badly with a national outburst of anger, and widespread condemnation from all sections of society.

News today that Home Secretary Alan Johnson has declared Al-Muhajiroun And Islam4UK proscribed organisations under the anti Terror laws, from 14th January 2010 it will be a criminal offence to become a member of these groups, or to attend or address any meetings in their name. Maximum penalty is 10 years in prison and their web sites will have to be shutdown and raising funds in support of proscribed organisations is also a crminal offence.

Choudary has shared public platforms with convicted terrorists and is claiming a victory for his organisation by having it banned.

Aardvark blogged a few days ago about the Islam For UK Leader Gets More Money On Benefits Than Our Soldiers Earn which does beggar the question why is the leader of an organisation that has been under surveillance getting state benefits in excess of £25,000 a year?

What attempts has he made to find work and come off benefits?

Why does Choudary get £7,000 a year more than people who are  fighting and dying to protect us from treasonous vermin like Choudary and Islam4UK?

Alan Johnson should be commended for at last doing something about Islamic militants in the UK, but in all honesty it’s too little to late and given the way that Labour have until now bent over backwards not to offend Islam, it’s more than likely a cynical pre General Election ploy, as Brown’s spindoctors have probably worked out there are potentially more votes in not offending the majority and instead offending a minority of wannbe jihadis.

This is what is currently on the Islam4UK Website END_OF_DOCUMENT_TOKEN_TO_BE_REPLACED 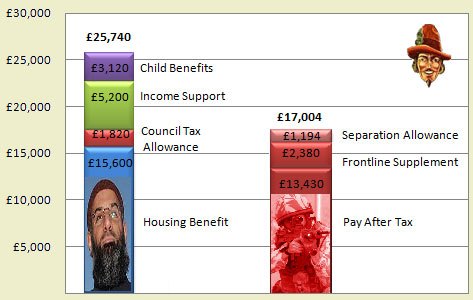 Another typical example of the multicultural stupidity that Blair, Brown and Labour have forced on this country.

A treasonous Islamic militant is paid more on benefits that our soldiers earn for fighting scum like Anjem Choudary, yet another event where Gordon Brown and Labour have failed our Armed Forces.

Hat tip to Guido for the chart.

“We are absolutely clear in our view that the police and the local authority should prevent this march from going ahead. The actions of Islam4UK are utterly objectionable. It has close links with banned preachers of hate and has arranged for them to preach in the UK by audio and video link. We can’t go on like this, the law should already have made it possible for them to be prosecuted for doing that.”

“The law should already have made it possible for them to be prosecuted for doing that.” Chris Grayling is correct they should be prosecuted but under Gordon Brown and Labour it will never happen, just in case they might offend somebody, might not be liberal or multicultural enough, or even worse it might cost Brown and Labour some immigrant votes. 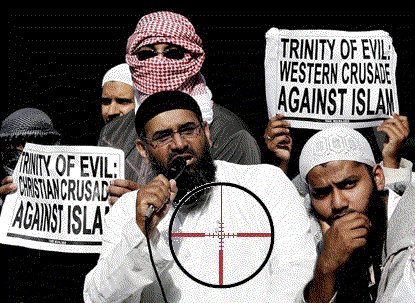 All Gordon Brown has to say is the march is “completely inappropriate“; go Gordon that’s telling them.

Considerable difference in response from Conservative Shadow Home Secretary and Labour Prime Minister, don’t worry Gordon Aardvark is sure you will have preserved your immigrant vote.

It is worth remembering that thanks to Labour’s back door immigration policy to force multiculturalism on this country that we now provide housing, food and benefits for traitorous scum like Choudary so that they can stab our armed forces and their families in the back.

More than 185,000 have signed up to the No To The Planned Islam4UK March Through Wootton Bassett group in less than three days, since it went live on Facebook.

The group’s creator Jo Cleary, who volunteers in running the Armed Forces support group Honour Our Troops, told Sky News Online her supporters were prepared to march on Downing Street unless the Prime Minister intervened.

She called on Gordon Brown to “categorically state” the march through Wootton Bassett would be banned, and avoid “one of his wishy-washy statements“

Sorry Jo wishy washy is all the cursed one eyed son of the Manse is capable of, there are votes at stake. 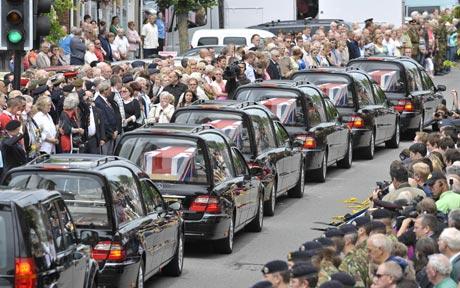 Wootton Bassett is a small market town in Wiltshire, which has become a focus for respect and shared grief and mourning with families of our war dead.

For our readers from outside the UK,  Wootton Bassett as a community turns out whatever the weather to line the roads as the hearses carrying the coffins our dead are driven to Oxford, not only in Wotton Bassett but all along the road small parties of ex-servicemen and women and people who just want to show solidarity with families line the route.

Wootton Bassett has been kept free of politics, no politician would dare show their face, they would not be welcome.

News that Islam For The UK is organising a march on Wotton Bassett has caused outrage and anger, and must be condemned as a very stupid and inflammatory act.

This is the type of Islamic fundamentalist stupidity that plays right into the hands of their enemies and motivates those who were happy to live and let live, to take a stand and adopt a militant opinion.
It is calculated to cause maximum offence to people.

Islam4UK, a platform for the global front Al-Muhajiroun, would like to announce the launch of a momentous march that is scheduled to take place in the following weeks, details of which will be released shortly inshaa’allah (God willing).

The destination of this very special event is the small market town of Wootton Bassett, located 6 miles Southwest of Swindon, in northern Wiltshire; Wootton Bassett, is currently famous for its public mourning processions held in memory of British soldiers killed whilst on military service in Afghanistan; coffins containing the dismembered bodies of these soldiers are usually draped in union jack flags and driven through the town centre from RAF Lyneham, as a tribute to their ‘sacrifice’.
The proposed march by members of Islam4UK is however of a very different venture, held not in memory of the occupying and merciless British military, but rather the real war dead who have been shunned by the Western media and general public as they were and continue to be horrifically murdered in the name of Democracy and Freedom – the innocent Muslim men, women and children.

It is quite extraordinary, that with well over 100,000 Muslims killed in Afghanistan in the last 8 years that those military serviceman who have directly or indirectly contributed to their death are paraded as war heroes and moreover honoured for what is ultimately genocide.

We at Islam4UK find this totally unacceptable and as a result have decided to launch the ‘Wootton Bassett March’ to highlight the real casualties of this brutal Crusade.

If you would like more information about the ‘Wootton Bassett March’ or are Muslim and would like to take part in it please contact the following numbers:

What are they hoping to achieve with this other than confrontation and still more recruits for the BNP ?

There is no link to their web site becuase Aardvark wont provide traffic to sites that peddle this sort of divisive hatred. END_OF_DOCUMENT_TOKEN_TO_BE_REPLACED