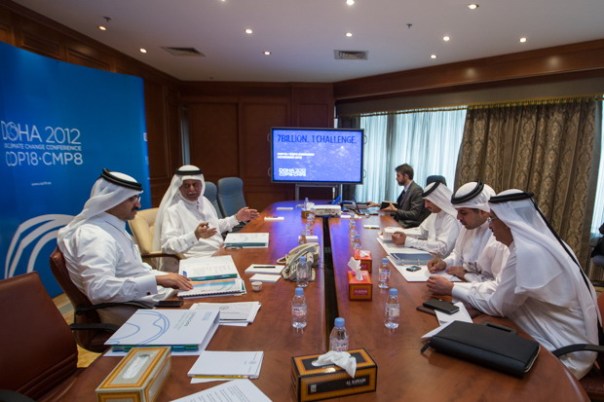 COP18 is barely 1 day old and already paranoia, mistrust and loathing are stalking the corridors.

The UNFCCC COP18 opened in Doha today, though the event passed with hardly a mention from most MSM outlets, the Guardian of course rallied to the cause with 2 posts, the first  a diatribe of loathing about rich countries and the west, the other was pushing for something that always quickens the pulse, and sets the knees trembling of the average warming alarmist, a new Green tax, this time on emissions from ships.

COP18 is a curious beast, there is no doubt that attendance is down from previous COPs like COP15 in Copenhagen, then there was the very strange announcement from COP18 President Abdullah bin Hamad Al-Attiyah earlier this month that “Shale Gas was good for the world“.

The Green NGOs like Greenpeace, WWF and FoE have already picked up on the Shale Gas statement and are crying about it, then there is the internecine fighting between various factions of the warming alarmists none of which is leading to an atmosphere of trust and goodwill for the negotiations: END_OF_DOCUMENT_TOKEN_TO_BE_REPLACED