The Redditch Saddleback Wont Be Getting A Peerage 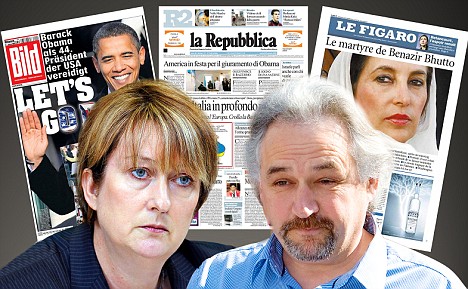 Hope that wank was worth my peerage

See if you can guess which Labour Ministers from the last Government wont be getting peerages.

The picture does give away that one casualty is the 250 lbs of chewed gum masquerading as  Jacqui  Smith, who was so busy troughing expenses that she failed to notice her hubby soiling the Kleenex.

Others who will also not be getting fitted up for fair trade sustainable ermine will be: END_OF_DOCUMENT_TOKEN_TO_BE_REPLACED

Tags: Jacqui Smith The Redditch Saddleback, What a Hoon

Brownfall The UK Election Gaffe To End Them All 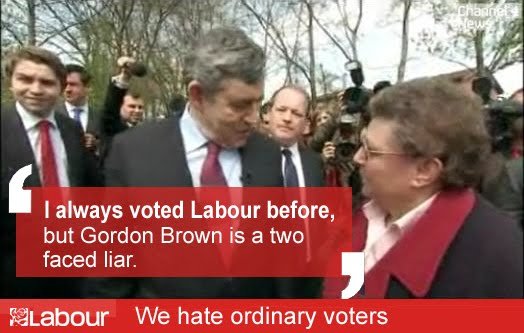 Hat tip BrownandBust for the poster.

The curse of Jonah Brown struck again today, this time on Jonah himself.

Totally forgetting that he has a radio mic on Brown gets into the car muttering “What a disaster” and “that woman is bigoted”, and quickly commited the political equivalent of farting in front of the Queen at an Investiture.

Google now has 430,000+  entries for the biggest political gaffe in living memory.

Labour claim to have sorted immigration, how can this be when the Labour leader’s, in private and thus real reaction is to call someone a “bigot”? END_OF_DOCUMENT_TOKEN_TO_BE_REPLACED

More bad news for the man who built a property empire from the ill gotten gains of the MP’s expenses scandal, it looks like Hoon’s diary is going to remain empty for April now, and probably at lot longer than that.

The fallout from the Channel 4 Dispatches program continues; earlier in the week Hoon was suspended from the Labour Party, after secret filming showed Hoon and 2 other Labour ministers as avaricious, grasping pond life in the cash for lobbying row. Well know trougher Margaret Moran was also suspended from the Labour Party as a result of the program, which is weird, because she was already suspened becuase of her MP’s expenses, maybe it only counts when you get suspended 3 times?

Anders Fogh Rasmussen chairman of the NATO forward planning committee than Hoon sat on, on hearing that Hoon was suspended from the Labour Party, told Hoon to go. END_OF_DOCUMENT_TOKEN_TO_BE_REPLACED

Anyone who saw the Channel 4 Dispatches program cannot fail to have been disgusted at the MPs behaviour, arrogance and the blatant lies they used to oversell their influence and importance.

From the delusional Margaret Moron who is too ill to take calls from constituents but looked fit and well at her interview, to Stephen Byers with his For Hire sign brightly lit and the two failed coup conspirators Hoon and Hewitt, as one they came across as grasping avaricious pigs who would stop at nothing to profit from their contacts and inside knowledge.

Yesterday Gordon Brown said there was no need for an inquiry, now this evening the BBC are reporting that Byers, Hoon and Hewitt have been suspended from the Labour Party.

What A Hoon! The Euphemism Replaced By Chump Will Quit At General Election

Former Defence Secretary and accomplished trougher and second home flipper Geoff Hoon has announced that he will quit Parliament at the General Election.

Hoon was useless as a politician, nearly as useless as Bob Ainsworth in the MoD, so useless in fact, that Hoon became a euphemism for a particularly offensive word until Peter Mandelson redefined it as a “chump” at the Labour Party conference.

Hoon brought nothing to the table, but he certainly walked away with a lot, a £1.6 million property empire, built on expenses and grace and favour apartments.

The defining moment of Hoon’s career was the non event coup against Gordon Brown, Hoon was unable to depose the most widely disliked and weak Prime Minister of modern times.

Ever the trougher Hoon is now hoping to hop on to the EU gravy train as a commissioner.

What a complete and utter Hoon.