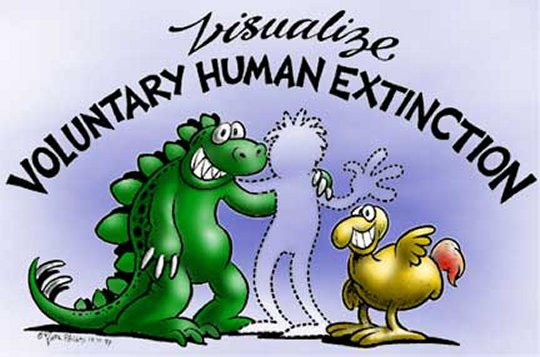 The hopeful alternative to the extinction of millions of species of plants and animals is the voluntary extinction of one species: Homo sapiens… us.

It is no secret that a significantly large segment of the warming alarmists put Gaia ahead of people, and long for a mass extinction event to do to Homo Sapiens, what a meteorite did for the dinosaurs.

VEHMT (pronounced Vehement) is a movement that wants people to die out so the planet can be saved, members of VEHMT are described as extinctionists on their website.

The top level spin on the website is for people to voluntarily stop breeding and for the human race to die out that way: END_OF_DOCUMENT_TOKEN_TO_BE_REPLACED