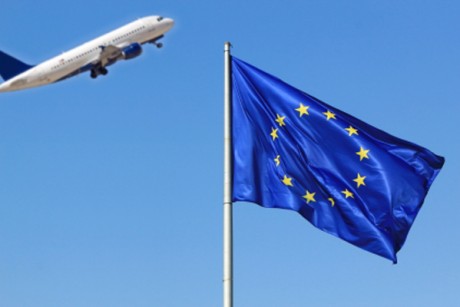 EU Climate Religion Zealots will cause a  Global Trade war

After a ruling from the European Court of Justice that the latest Climate Religion tax does not infringe on the sovereignty of other nations, Hedegaard and Huhne are steaming full speed ahead with the Green Tax on flying from January 1st 2012.

There is global opposition to the Green tax on flying from the USA, India, China and 40 other countries.

The Green flying tax will typically add a further £80 on the cost of a family of 4 flying to the USA, this is  on top of other recent Green tax hikes on flying.

China has warned the European Union to abandon its controversial carbon tax on airlines or risk provoking a global trade war.

Adding weight to the warning, an industry insider told the Financial Times that the Chinese government was seriously considering measures to hit back at the EU if it insists on charging international airlines for their carbon emissions.

In a case initiated by US airlines, the European Court of Justice ruled on Wednesday that the EU’s carbon emissions trading scheme did not infringe on the sovereignty of other nations, and that it was compatible with international law. The change is set to go into effect from January 1.

Chinese airlines have also been preparing an legal challenge in Europe and they still plan to proceed with it, but Chai Haibo, deputy secretary general of the China Air Transport Association, conceded that the European ruling complicated matters as it means they will need to find an alternative reason to challenge the law.

Even if court action fails, Mr Chai was optimistic that concerted global pressure could yet persuade the EU to repeal its law. In the short term, he called on Brussels to delay implementation in light of the intense international outcry that it has provoked.

“Except for the EU, no countries support this,” he said.

The last word belongs to Xinhua, China’s state controlled news agency and they are nothing if not blunt:

This is a trade barrier in the name of environmental protection, and it constitutes an attack on the interests of travellers and the international aviation industry,” it said in an editorial. “It will be difficult to avoid a trade war focused on a ‘carbon tax’ for airlines.”

The last word did belong briefly to China, until this update just in:

Europe faces the prospect of a vicious trade war with the US after the EU’s highest court dismissed an American claim for its airlines to avoid new emissions-trading rules.

From 1 January, the EU will bring aviation into the Emissions Trading System, intended to help Europe to comply with its commitments on climate change. All airlines whose routes touch the EU will need carbon permits. Costs to carriers will rise steeply unless they cut flights or increase efficiency.

A group of US airlines, backed by Washington, challenged the legitimacy of imposing the burden on non-EU airlines. But the European Court of Justice yesterday rejected the claim. The EU affirmed its intention to roll out the plan 10 days from now.

The time for Britain to leave the EU is now, let the unelected Climate Religion zealots of the EUSSR drag down Europe with the moral superiority of leading the way over the edge of the cliff of economic ruin.

All Green environmentalism will ever bring is more taxation and then still more taxation with an ever decreasing standard of living as people are taxed in a new and inventive ways to live the Green Dream.